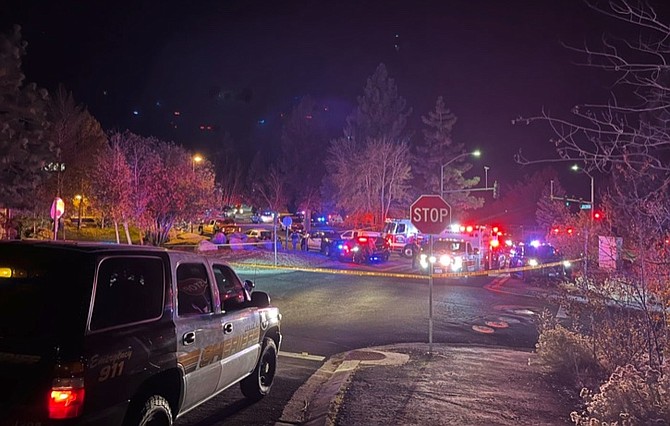 Agencies from all around the Tahoe Basin responded to a report of fentanyl exposure at the Douglas County Sheriff's Substation in Stateline. Ashleigh Goodwin/Tahoe Daily Tribune

A woman admitted she brought more than 20 ounces of fentanyl to Douglas County during three drug buys, the last of which resulted in five deputies having to be hospitalized for exposure to the lethal drug.

Regina K. Rojas, 35, admitted she conspired on more than one occasion with co-defendant Jessica Thomas, 32, between June 2 and Oct. 20 to sell fentanyl and heroin.

Each of the conspiracy charges carries a 1-5-year sentence, according to Nevada Revised statutes. The aggregate of all eight sentences, should they be run consecutively is 80 years with a minimum of 10 years. She is not eligible for probation on the trafficking charges.

Thomas is scheduled for a preliminary hearing in Tahoe Township Justice Court on Jan. 5, according to prosecutor Erik Levin.

The hearing will determine if there is marginal or slight evidence sufficient to bind Thomas over for arraignment in district court on the charges. Should she deny the charges there, the case would be set for trial.

Both women have been in Douglas County custody since their arrest.