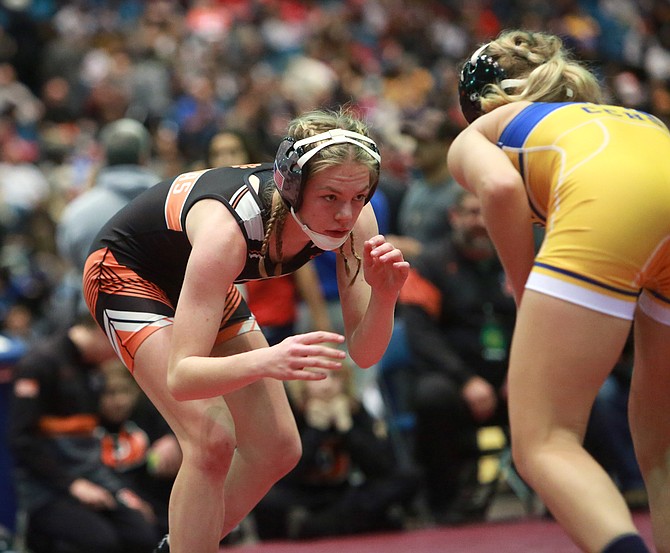 Douglas High School’s Bliss Moody circles her opponent in the opening round of their third place match at 120 pounds. Moody became the first DHS female wrestler to medal at the Reno Tournament of Champions.
Photo by Carter Eckl.

She was on the varsity soccer team this fall, she holds a school record in 4x100 meter relay that she helped set last spring and now she’s the first girls medal winner from the Reno Tournament of Champions in Douglas High history.

Saturday, Moody was fourth in the 120-pound weight class.

“It’s something new for me. Even though I’m a sophomore, I have two more years to get even higher in this tournament,” said Moody.

Douglas head coach Jake Fair said Moody’s growth on the mat came after she was forced to watch from the sidelines last winter due to injury.

The time she spent next to the coaching staff at meets last season taught her a few things about how she could grow as a wrestler.

“I was able to learn to take my time. Overall, it’s just made me better at this sport,” said Moody. “I was definitely focused on where I was mentally.”

“Today she stepped it up on her takedowns. It was a dramatic difference,” said Fair. “Being the leader on the girls team, she came shining through.”

Fair echoed Moody’s sentiment on her patience, which allowed her to go 3-2 on the day.

The next goal on Moody’s list it to medal at the state tournament.

“Making things open up the way you want them to and controlling the action is a learning process,” said Fair. “It’s amazing to watch her growth.”

On the boys side of things, Douglas earned 27 team points to take 73rd of the 95 teams in attendance.

Michael White was a force at heavyweight where he went 3-2 with all three wins coming via pin.

White didn’t face anyone local but had a pin in each round of his three wins.

Jaxon Nixon picked up a pair of wins by fall at 175 pounds for the Tigers.

Aaron Tekansik (190 pounds) had a 4-2 decision over an opponent from Utah.

Caine Klein had a win by fall at 165 pounds that took just 91 seconds.

“We had a ton of team growth,” said Fair. “We were not only able to participate in some amazing wrestling over the last two days, we were able to watch a lot. We watched the college wrestlers with dual mats (Friday). It was a great experience on a different level. I’m looking forward to what we can do at the (Sierra Nevada Classic).

UP NEXT: Douglas will get to the SNC Dec. 28, but first the Tigers will host a triangular dual against South Tahoe and Fernley on Dec. 23.