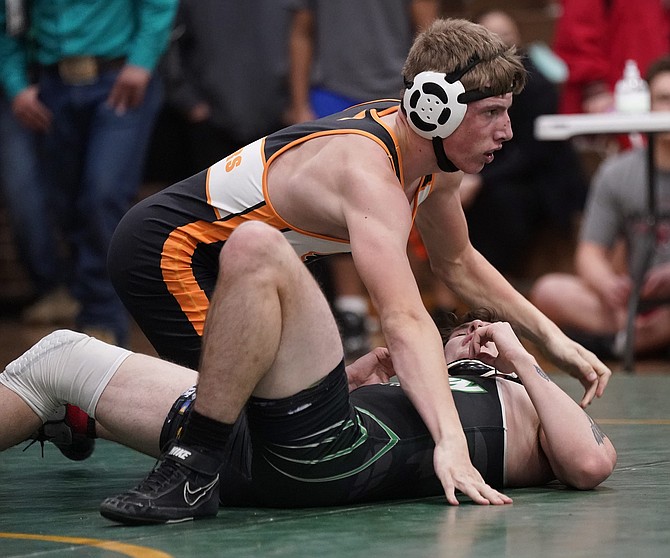 Jackson Nixon looks up after a pin in a match last winter. This season, Nixon will be one of three captains on the Douglas High wrestling team.
Photo by Ron Harpin.

The Douglas High School wrestling room will be full this season.

After the first weekend of competition, the Tigers still boast 43 wrestlers on the roster, including boys and girls.

Girls wrestling was recognized for the first year in Nevada this winter.

“We have a lot of returners and (the) senior leadership is really good,” said Douglas High head coach Jake Fair. “We were very young last year. … With the experience we have now, I’m looking to repeat against Reno, McQueen, Reed and I’m looking to beat Carson.”

Last season, the Tigers sent 11 wrestlers to the state tournament. They’re looking to expand on that this winter.

Leading the way will be the three captains in Aaron Tekansik, Jaxon Nixon and Victor Valdez.

“I’ve wanted to be a captain since I was a freshman,” said Nixon. “I want to help make this team better. Having this many kids come out is great. I’m glad to see the sport is increasing.”

At 106 pounds, Ella Kavanaugh and Jasmine Tamondong will be competing for a varsity spot after wrestling against each other in middle school.

“I’ve seen a lot of growth out of Cody Highfill,” said Fair.

Kai Blumenthal will mix in at the 132-138-pound weight class also.

Kellen Rackley is coming back from a shoulder injury but is expected to be a staple in the lineup.

“He wrestles year-round, so we are excited to have him,” said Fair of Rackley.

Kolton Zinn, who went 5-0 in the opening tournament at Fallon, will fit into the middle of the lineup.

“We have a lot of youngsters in the room,” said Fair. “We do have some younger kids, who can compete at the higher levels as well.”

Dalton Nixon will join his older brother, Jaxon, in the varsity lineup throughout the season.

Jaxon Nixon will be penciled in at 175 pounds.

Sage Adie and Michael White will hold down the 215-pound and heavyweight weight classes, respectively.

Douglas has two heavyweights and four wrestlers in the 215-pound weight class this winter.

The Tigers anticipate being able to fill nearly every weight class throughout the season.

The NIAA also altered the weight classes this season, adding larger gaps between classes at the heavier weights.

“That’s where I’m heavy, numbers wise,” said Fair. “I got all the big guys this year, so it’s very interesting.”

There are still 14 weight classes total.

Among other changes was the recognition of girls wrestling within the state.

Fair said the Tigers had a record turnout for girls wrestlers at the start of the season.

Overall, there will be seven girls wrestlers with the Tigers this season.

“That proves the desire. They want to grow this sport and they want to be here,” said Fair. “They’re in it for the love of the sport, from what I see. It’s a good thing for our sport.”

Along with Kavanaugh and Tamondong, Bliss Moody, Kelsie Doney, Monique Alloway, Kailia Blumenthal and Mica Klein are all expected to wrestle for Douglas this season.

With such a positive turnout, Fair wants the Tigers to push for as many state qualifiers as possible.

Within the North, winning dual meets will be the priority.