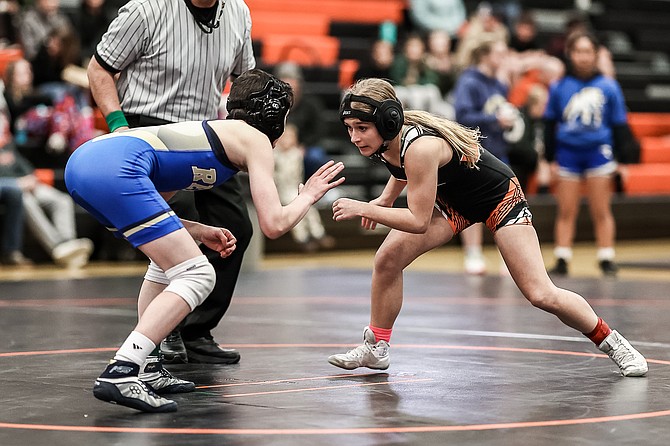 In the season’s first home meet of the year, Douglas High School wrestling was able to showcase for its home fans what a full lineup of 14 weight classes would look like.

Several wrestlers, who are all making their own marks early on in the season, impressed head coach Jake Fair.

Of course, this weekend the Tigers will also be competing in the Reno Tournament of Champions to see more high quality competition.

At 106 pounds, freshman Ella Kavanaugh jumped right into action without much issue.

Kavanaugh used a reversal late in round two to gain a 7-4 edge, but the match was quickly tied to start the third at 7-7.

After picking up an escape point, Kavanaugh put the match away with two late nearfall points to win by 10-7 decision.

Her second match latest just 90 seconds before Kavanaugh pinned her opponent on his back.

“What a beast,” said Fair of Kavanaugh. “She worked her butt off this week. She came in today and it showed. She went full beast mode. It was really fun to watch.”

Senior captain Victor Valdez spent a combined 80 seconds on the mat between his two matches winning both via the pin at 138 pounds.

Sage Adie, who represented the Tigers at 215 pounds was also 2-0 after battling his way to a 19-17 win by decision against the Raiders.

Adie fell behind 14-6 in the middle of the second period before working his way back with takedowns and nearfall points to grab the Tiger team three points with a decision.

He needed just 68 seconds to win by fall against Reno.

“Sage Adie taking shots and driving. It was beautiful to watch,” said Fair. “Today he came firing on all cylinders.”

Aaron Tekansik was 2-0 at 190 pounds, earning two victories without much difficulty with pins in the first and second round.

Tekansik’s ability to work his double leg takedown into any match impressed his head coach.

Elsewhere, several other Tigers picked up at least one win on the day.

Michael White won by fall in 1:41 in his opening match against Reed.

White worked his opponent’s head down and rolled to his side, forcing his opponent onto his back for the pin.

Caine Klein picked up a 16-1 win by tech fall in his opening match before an injury in his second matched forced him to default.

Jaxon Nixon needed just 62 seconds to pick up his win against Reed.

Cody Highfill solidified the Tigers with five points against Reno, winning by tech fall 17-2. He didn’t wrestle a first match at 113 pounds due to it being an open slot for Reed.

“I think everybody wrestled tough and that’s what we were after,” said Fair. “We have some things we can still tune up, but I think we will be fine.”

It was an emotional meet for the Tiger faithful as well, which had a moment of silence prior to the start of the meet for coach Steve Deaton, who passed away from his battle with cancer before the season started.

Douglas’ new singlets this season have an orange Tiger paw print with the letters ‘SD’ imprinted on the back.

“Some emotions on the line missing Steve. Those singlets were a big deal,” said Fair.