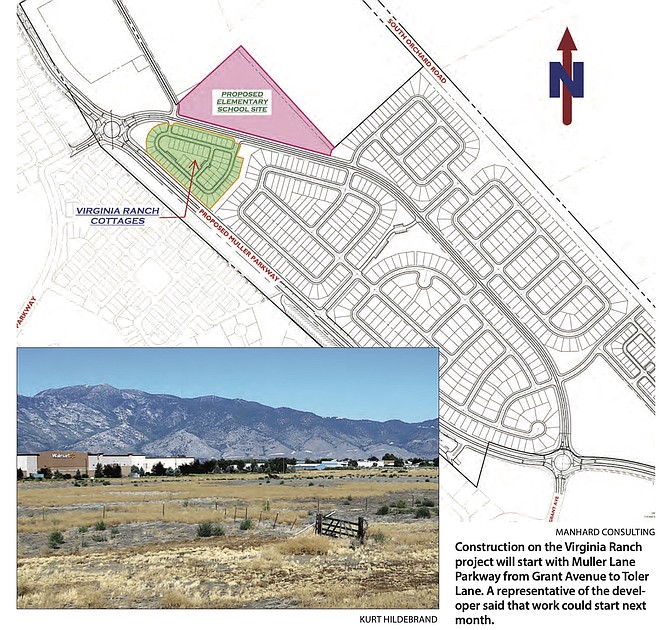 Builders plan to begin work on a thousand-unit subdivision in Gardnerville by next year, a spokesman said on Tuesday.

But first, they’re going to start work on their section of Muller Lane Parkway between Grant Avenue and Toler Lane.

The property has the same 1,020 units that were originally approved, but the owners want to make some adjustments, including increasing the size of the lots. To do that they’re seeking to trade a 10-acre school site for eight units for use as employee housing by the Douglas County School District.

The school site was part of the original approval of the project and is located near a proposed roundabout at Stodick Parkway and Muller Lane not far from where the road now ends south of Toler.

With the issues the district has had attracting employees due to the high cost of housing in Douglas County, and an enrollment that has declined for the last 20 years, school board members voted Tuesday to negotiate with the owners.

Final approval of the proposal would return to the board once a deal was worked out.

Developer representative Don Smit of Project One said the 1.6-mile section of Muller Parkway is 85 percent designed and that plans are to begin construction next month. He said the road will be built to four lanes and include roundabouts at Grant Avenue and Stodick Parkway.

The property was subject to a settlement agreement after Douglas County lost a lawsuit, that was in part responsible for the approval of the Gardnerville Walmart.

Ironically, it was a requirement that the original developer construct Muller Parkway to state standards when other sections were not that led to the lawsuit.

Douglas County is required to build three miles of the Parkway across Park Ranch Holdings land north of Buckeye Road in Minden.

County Transportation Engineering Manager Jon Erb said the county has applied for several federal grants for its segment of the road and could hear back by the end of summer.

The project is 90 percent designed and is being reviewed by the county and Ames Construction.

The road was originally estimated at $12 million to build two lanes, but when those contracts go to bid, they could come in higher due to inflation.

Should the county obtain grants, those would determine the timeline for construction.

The last piece of the more than 30-year effort to provide an alternate route to Highway 395 around Gardnerville and Minden is located north of Monterra.

That segment was supposed to be done as part of the project’s second phase in Aug. 31, 2021.