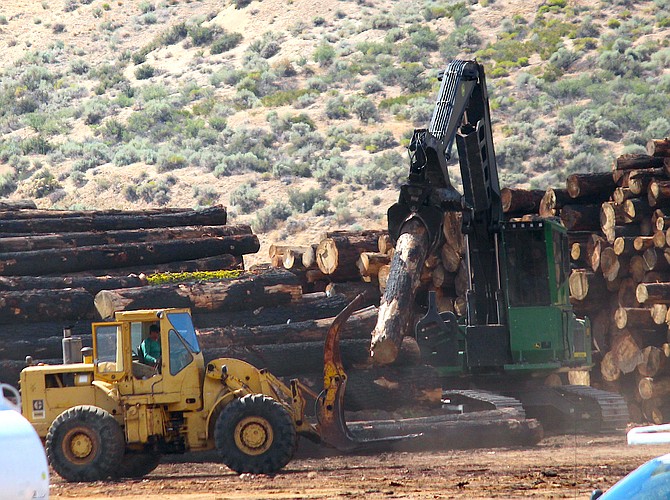 Workers stack salvaged wood from the Caldor Fire on a site behind Carson Valley Plaza just west of Vista Grande on Wednesday.
Photo by Kurt Hildebrand.

Nine months after it was fully extinguished, the Caldor Fire arrived in Douglas County in the form of a big stack of dead trees to be processed by a sawmill in northern Douglas County.

Located on Washoe Tribe land just west of Vista Grande, 37.5 acres is being cleared for the wood that was salvaged from Sierra-at-Tahoe Ski Resort.

Of that land 25-30 acres will be used to store logs while 10 acres will be developed for the mill, located on the northern and eastern part of the property next to the shopping center.

As evidenced on Wednesday, log decks will be 25 feet tall while the tallest building is expected to be 40 feet, according to Tahoe Forest Products.

Permits for the mill are being processed through the Washoe Tribe, according to the company.

Officials said that the site was selected to avoid environmentally sensitive areas on the Tribe’s Clear Creek land.

“(Tahoe Forest Products) will dry certain lumber products in kilns, which will create a modest level of nontoxic emissions,” according to the company. “These emissions will be scrubbed and will be compliant with Federal EPA requirements as well as local and state particulate limits.”

A well is being drilled near the northern boundary of the site.

Operators are proposing a community meeting to discuss their plans.

Residents are already expressing concern about the project, with at least two residents contacting Douglas County for more information.

Resident R.A. Wood filled out a comment form for the commissioners’ agenda on Thursday requesting the county weigh in on the project. He said he was concerned by the noise from the project.

The Tribe has 145 acres that stretches from the southern edge of Carson Valley Plaza north to Highway 50.

That property is also where the proposed extension of Vista Grande south to Jacks Valley Road is proposed.

The Caldor Fire burned 346 square miles between Aug. 14 and Oct. 21, coming to within a few miles of Carson Valley. The fire prompted mandatory evacuation of South Lake Tahoe and Stateline — the first time Nevadans have been required to evacuate due to a fire in Douglas County history.

County commissioners are still working with the Bureau of Land Management and the Bureau of Indian Affairs on a proposal to mine gravel on Washoe Tribal allotment land. Unlike the mill site, that land is private property held in trust for a Washoe family.