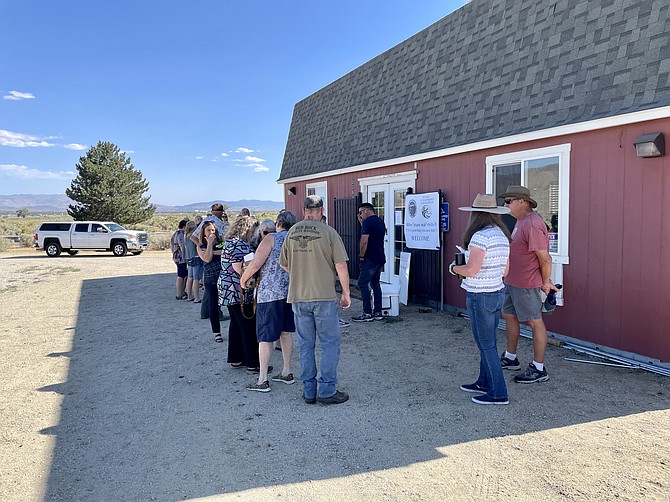 A new sawmill in northern Douglas County, on Washoe tribal land, may be a vital component of future forest management in the region, but neighbors close to the project are having a difficult time seeing past immediate impacts to their neighborhood.

“It’s a very valid project but is in a neighborhood where it does not belong,” said Summerhill Road resident Melanie Krause.

Krause was one of dozens of concerned residents who attended an open house Tuesday at the Washoe Development Corp. Red Barn off South Sunridge Drive.

Focused on forest thinning and salvaging of burned wood from wildfire zones, the new sawmill came as a surprise to neighbors. The approximately 40-acre site abuts the neighborhood north of Jacks Valley Road near Summerhill Road. The operator, Tahoe Forest Products, leased the acreage from the Washoe Tribe and has been transporting logs through Topsy Lane from Highway 395 since July. Those logs were from clean-up efforts at Sierra-at-Tahoe Ski Resort, burned in last year’s Caldor Fire. The plant will include a sawmill building and lumber sorter, dry kilns, and a planer mill and sorter to finish lumber for shipping.

Tahoe Forest Products estimates the sawmill will produce up to 50 million board feet a year starting in early 2023 and will employ around 40 people. The log yard is expected to run from 6 a.m. to 5 p.m. Monday through Friday with the mill running 7 a.m. to 3 p.m.

Krause is worried a proposed well for the milling operation will negatively affect neighbors’ private wells, not to mention noise and potential dust from the site.

“We can hear everything and see everything,” she said.

The mill comes at a time when megafires, like the Dixie and Caldor fires, have ravaged the Sierra Nevada. These are “large, intense blazes that severely damage landscapes and the communities within them,” according to the Sierra Nevada Conservancy. The agency reports more than 1.5 million acres burned in the mountain range in 2021, beating the record of the previous year. And hotter temperatures and drought linked to climate change are making matters worse.

A 2022 study conducted by the University of California, Davis, estimated current forests in the region are six to seven times thicker than they were a century ago, becoming powder kegs for megafires. Combatting such fires means reducing tree density and ground fuels and using prescribed burns in some cases—all to thin choked, overgrown areas.

“This project came about because there was no reasonable market for salvage logs and thinnings from the Tahoe Basin or from the Humboldt Toiyabe National Forest,” Tahoe Forest Products CEO Jon Shinn said in a statement. “A local sawmill is one of the critical missing links in beginning to address forest health and resilience, not to mention critical post-fire cleanup efforts from catastrophes like the Caldor Fire.”

Dawn Wood, who lives at the corner of Silverado Drive and Bucks Way, is worried about fire retardant from salvaged logs and contamination of soil and water.

“We don’t want to die in fires. It’s a fabulous thing to have but not in front of my driveway,” she said.

Wood from the new sawmill will be dried in kilns and create a “modest level of nontoxic emissions,” according to Tahoe Forest Products.

“These emissions will be scrubbed and will be compliant with federal EPA requirements as well as local and state particulate limits,” the company said in a statement.

“TFP recognizes the importance of protecting the environment while respecting the Tribe’s cultural and conservation areas in and around Clear Creek,” she said in a statement. “This small parcel will enhance and sustain thousands of acres of sacred forest land previously inhabited by the Washoe people.”

Officials said that the site—more desert than alpine environment—was selected to avoid environmentally sensitive areas on the Tribe’s Clear Creek land. The Tribe owns 145 acres that stretches from the southern edge of Carson Valley Plaza north to Highway 50.

For resident Ann Essex, who lives more than a mile east of the project, the potential benefits of the sawmill don’t outweigh the negative impacts. She’s concerned about easterly winds reaching her home.

In a follow-up email on Wednesday, Loomis said engineers are reviewing well options.

“The Washoe Tribe is always conscientious about the environment and all Washoe Tribal projects comply with environmental and cultural standards,” she said. “Over 400 pages of environmental assessment included a soils study, and addressed storm water run-off to ensure the conservation areas and specifically protection of Clear Creek.”
Loomis also said operators are addressing dust and noise concerns.

“Multiple water tanks continuously traverse the property to mitigate the dust,” she said. “After meeting with neighbors, Tahoe Forest Products revised some of the building locations and engaged a company to work on soundproofing techniques to address noise concerns.”
Loomis emphasized how important the project is for the Tribe.

“The Washoe Development Corporation was chartered by the Washoe Tribe of Nevada and California to support the Tribe's intentions to become self-sufficient and improve the quality of life for all Washoe Tribal Members,” she said. “The Tribe recognizes that to become economically sovereign they must engage in enterprise solutions provided through use of Tribal land. The lease agreement with Tahoe Forest Products has significant financial impact for the Tribe.”