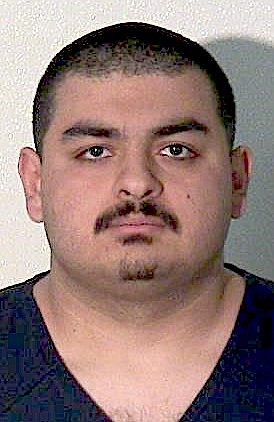 A graffiti artist who painted blue gang signs on either side of Lutheran Bridge in Gardnerville is scheduled to appear in East Fork Justice Court after being sentenced to 1-5 years in prison on Monday.

Rafael Daniel Chapa Jr., 22, admitted to a felony count of using his brother’s identity to avoid being arrested for a probation violation in a South Lake Tahoe battery case.

Chapa was arrested Feb. 2 after blue gang graffiti started showing up on stop signs and other public places around Gardnerville.

Gang Task Force member Deputy Tyler Jones testified that Chapa was a member of a Sureños street gang. He said Chapa, whose street name is Wolfie, was marking the Ranchos for his branch of the gang, known as the Street Villains.

He said that the markings could open Chapa up for reprisals both from members of the rival Norteños or even other Sureños chapters.

Attorney Brian Filter said that Chapa has a child on the way and was ready to give up the gang life.

“Mr. Chapa is at a crossroads,” Filter said. “It is his desire not to live that life. He has a pregnant girlfriend. He wants to live a clean life to support and take care of his family.”

Chapa’s father is a founding member of the Street Villains who has been to prison.

Chapa was given credit for 83 days time served since his arrest.

• A former pro football kicker is facing another prison term for driving under the influence.

David John Caylor, 55, faces 2-15 years in prison after admitting Monday to a count of driving under the influence with at least two and maybe three prior felonies.

Caylor was arrested March 2 after deputies responded to a report someone high-centered a Dodge Ram pickup on a trash can on Kimmerling Road.

When they arrived, they found Caylor behind the wheel and revving the engine to try and get unstuck. When he got out of the vehicle, he required help remaining upright. A preliminary breath test revealed he had a .217 blood alcohol content, more than twice the legal limit.

On Monday, Caylor also admitted to violating his probation

Caylor has been on probation since he admitted to a count of possession of a firearm by a convicted felon last year.

He attempted to buy a .45 caliber handgun in July 2020 while he was on house arrest for a prior felony instance of driving under the influence.

The only question is whether a DUI in Victorville, Calif., was a felony, but attorney Maria Pence acknowledged that wouldn’t change the charge Caylor admitted on Monday.

He is not eligible for probation and must also pay a mandatory minimum $2,000 fine when he is sentenced on the DUI and probation violation on June 6. Should his probation be revoked he faces an additional 1-4 years in prison.

• A Winnemucca man who was allowed to deal with cases in Humboldt County after he admitted a stolen vehicle charge is facing trial there.

Common was arrested in Minden on Dec. 28, 2021, after he abandoned an orange Jeep in a ditch along Highway 395 and then hitchhiked to Indian Hills with Celia May Doyal, who is in Douglas County custody awaiting a May 16 hearing on a similar charge.

Common is facing trial in Humboldt County and isn’t likely to return to Douglas until that case is resolved. He also faces a hold from the Department of Parole and Probation on a suspended 2-5-year prison sentence on a theft charge out of Humboldt.

District Judge Tom Gregory issued an order for Common to return to Douglas after his other cases are complete.