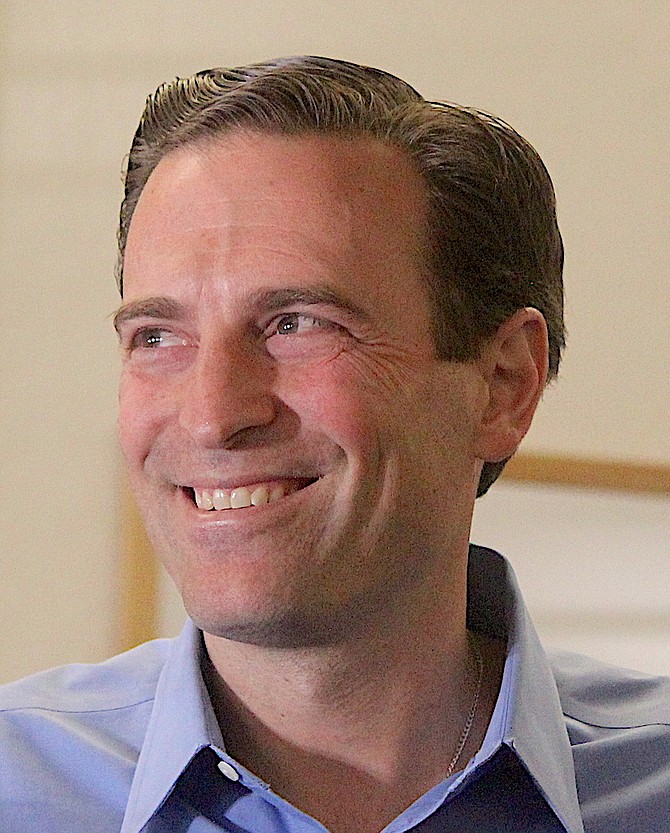 Adam Laxalt at a session in Gardnerville in October 2021.

U.S. Senate candidate Adam Laxalt will be bringing Sen. Ted Cruz, R-Texas, to Gardnerville on Thursday as part of their “Flip Nevada Tour.”

Sheriff Dan Coverley will be joining the 11:45 a.m. rally for border security at the Douglas County Community & Senior Center.

Laxalt and Cruz are scheduled to tour around Western Nevada, with stops in Fallon and Sparks after leaving Carson Valley.

Laxalt will have to pass by a lot of signs for Capt. Sam Brown who is challenging him in the Republican primary for the opportunity to challenge Sen. Catherine Cortez Masto in November.

On the other side of the aisle, Douglas County Democrats, candidates and volunteers will be conducting precinct meetings and their county convention 9 a.m. April 30 at Douglas High School.

The precinct meetings are open to all registered Democrats, with selection to the convention immediately after the meetings are completed.

Two days before the convention, the Douglas County Democrats Central Committee will host a forum for the four Democratic candidates for lieutenant governor.

There are 14 candidates seeking the office in all.

Douglas County Republicans are circulating petitions to require voters to show a photo identity and to stop ballots from being mailed to residents.

“The Douglas County Republican Party this past month has been helping change our Voter Integrity Laws by circulating Petitions to require showing a Photo ID when going to vote at the polling place,” Voter Registration Chairwoman Virginia Nisse said.

The petition is for an amendment to the Nevada Constitution and would have to be approved by voters twice.

“The second petition is in response to AB321 which came about during Covid where everyone was mailed a ballot at their home,” she said. “This was supposed to be a temporary measure, but then became “AB 4-ever” and was passed in the dead of night in our Assembly.”

That initiative is for a referendum on the new election law.

For either item to make the ballot, proponents would have to gather a minimum of 35,200 signatures from each congressional district by June 29 and a total of 140,777 signatures.

Petitions may be signed at the Douglas Community and Senior Center 9:30 a.m. to 1:30 p.m. every Monday, as well as at Douglas County Republican office, 1507 Highway 395 Suite B. Gardnerville.

Nisse urged residents to register for either major party. Because Nevada has a closed primary, only Republicans or Democrats may vote in partisan races, which include offices from U.S. Senate to county commissioner this year.

“Douglas County Republicans also want you to be able to have the strongest voting power possible, so we encourage you to register either Democrat or Republican depending on your personal beliefs,” Nisse said.

Nonpartisan voters will only see those races on their primary ballots, which includes one Douglas County School Board race this year.