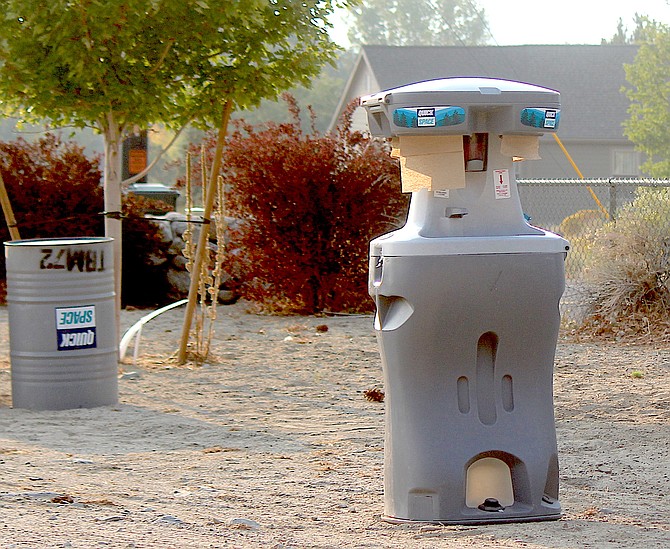 This is not the droid you're looking for, unless you want to wash your hands. Hand wash stations are set up across Genoa in preparation of this weekend's Candy Dance.
Photo by Kurt Hildebrand.

Genoa, Nev. — It’s Tiger Wednesday today with the Douglas High School Homecoming Parade 5-8 p.m. at Minden Park. Olympian Krysta Palmer and Douglas County District Attorney Mark Jackson will be inducted into the Douglas High Hall of Fame. The homecoming game is 7 p.m. Friday against Reed and the homecoming dance will be Saturday.

The handwashing droids and portable toilets are the first arrivals for this year’s Candy Dance. Expect congestion through Genoa over the next five days as final preparations begin for this weekend’s craft fair and Saturday’s dinner dance, which is down to 53 available tickets, according to Genoa’s web site.

It’s going to be a smoky morning in Carson Valley today as the Caldor Fire started picking up again last night. Most of the fire’s spread is into the gap between what I liken to the bear’s neck and its right leg, located north of Caples Lake. The fire has been burning in the interior for a week, but Tuesday saw the first spread outside of the lines.

Assemblyman Jim Wheeler, R-Gardnerville, indicated he plans to seek Sen. James Settelmeyer’s seat next year, though he’s not going to formally announce until after redistricting’s done in the next month or so. It came up after we received an announcement from Gardnerville resident Blaine Osborn for Wheeler’s Assembly District 39 seat on Tuesday. Can’t really talk about one of those without the other.

It will be interesting to see how Sen. Dean Heller’s entrance into the governor’s race will affect the rest of the field for that nomination, which isn’t until next June. Foothill resident Dr. Fred Simon was the first person to formally announce earlier this year. Filing for state elections isn’t until March, so we’ve got a ways to go.

The county is accepting applications for the community grant program at https://www.douglascountynv.gov/government/departments/finance/community_grant

Expect widespread haze and smoke before 2 p.m. then widespread smoke after 5 p.m. The wind will be out of the southeast at 5-10 mph shifting to the west at 10-15 mph, with gusts of up to 25 mph. Today’s high should be around 84 degrees.