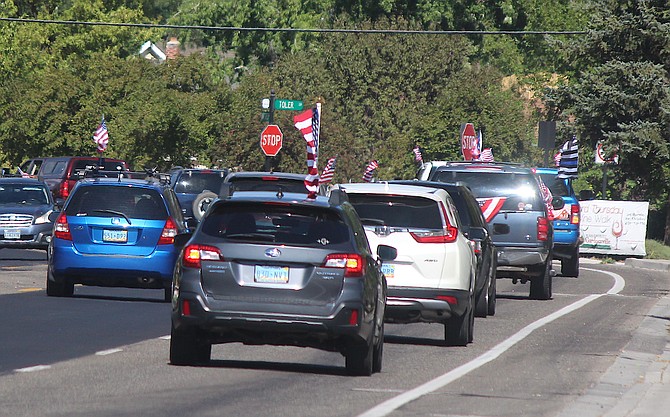 Members of the Douglas County Republican Central Committee conducted a vehicle rally through Gardnerville and Minden on Saturday in observance of the 20th anniversary of 9-11.
Photo by Kurt Hildebrand.

The fourth annual Heritage BBQ is high noon Sept. 25 at the Twisting T-Bar Ranch in Gardnerville.

Conducted by the Douglas County Republican Central Committee, the barbecue started “years ago to showcase working ranches throughout the Carson Valley,” organizers said.

“In the past and the present, our local ranchers and farmers have raised cattle, sheep, horses, hay, and crops on the valley’s fertile ranchlands,” spokesman Larry Walsh said. “Many of us drive by these ranches often and enjoy seeing the animals grazing or watch the harvesting of hay; but have you ever wondered what these ranches look like from the inside looking out.”

The barbecues allow residents an up-close view of these ranches and to honor Carson Valley’s agricultural and ranching heritage and culture.

Entertainment will be provided by Virginia City’s David John and the Comstock Cowboys western band with opening music by local teenage singing artist Jakota Wass. A western BBQ will be served by Carson City BBQ. Guests are encouraged to dress in their best western wear and compete for a $250 cash prize each for best female and male western outfit. There will be a live and silent auction. Nationally renowned speaker Free Market Warrior Loren Spyvack will offer a lighthearted and playful conservative slant on today’s political climate.

A combat 5.56 forged black anodized rifle from Axelson will be auctioned by Sen. James Settelmeyer, R-Minden.

The Twisting T-Bar Ranch located along the east fork of the Carson River at 1290 Centerville Lane in Gardnerville.

Tickets are $75 per person and may be purchased on the Douglas County Republican Central Committee’s website at www.douglasgop.org, or in person at Republican headquarters at 1507 Hwy 395, Suite B in Minden. For additional information, call (775) 782-4467.