Wild animals evacuating from fire, too. 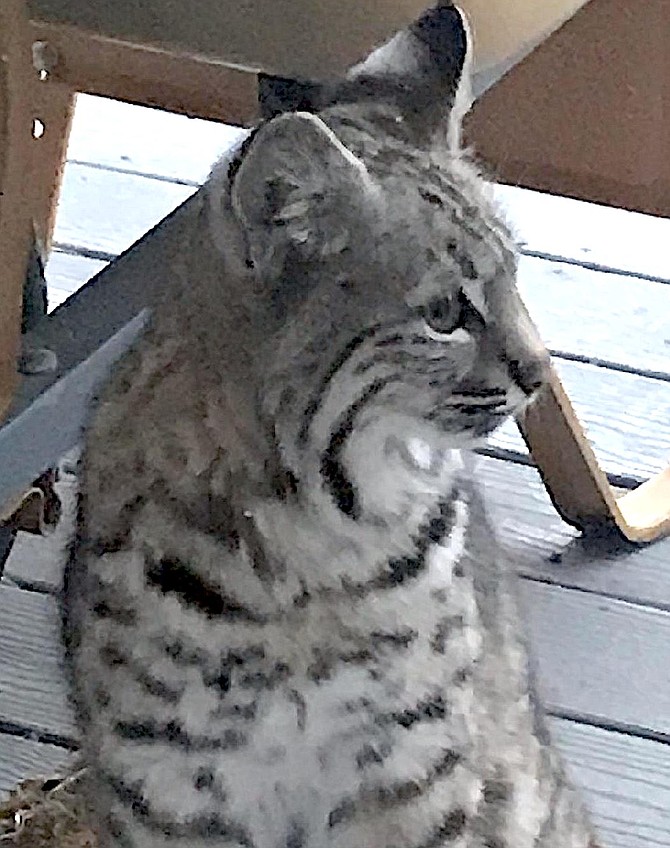 As I pruned some trees last Saturday afternoon, my neighbor, Nikki, called out to me from across the irrigation ditch separating our yards to relay something that happened the night before. A friend of hers was driving home late at night and as she approached the crest of a hill where the ditch crosses the road, a bobcat dashed in front of her car. This encounter took place around 2 a.m. and only about a block away from where Nikki and I were standing when she told me the story.

It took about an hour to connect Nikki’s story to an odd incident that happened to me that same night, because I’d nearly forgotten about it.

I fell asleep on the couch Friday night and woke up about 1 a.m. On my way to bed, I glanced out the back window and noticed a potted basil plant that looked pretty droopy. In my groggy state I thought to myself, I should bring that in and give it some water.

As soon as I opened the back door and stepped outside, I heard something that can best be described as a solitary “chuff” come from our backyard’s berm area. The sound jolted me instantly awake. I spun toward the direction I thought the sound came from but saw nothing. All was eerily quiet and still aside from the pounding of my own heart. I grabbed the plant and brought it inside, looking behind me and back through the window all the while but I never saw anything. Discombobulated, I figured maybe I’d just imagined the noise.

Nikki’s story, however, made me reconsider. Perhaps I really did hear a chuff that night, and perhaps it came from an animal I’ve never seen in my backyard before.

A recent edition of The Record-Courier reported that current wildfires might drive bears and other displaced animals into unfamiliar areas in search of shelter, food, and water, which made the situation seem even more plausible.

I reached out to Ashley Sanchez at the Nevada Department of Wildlife, who said that as the Caldor Fire continues to push eastward, animal encounters may increase in areas around the Tahoe Basin and especially in Douglas County. She said this activity is no cause for alarm and emphasized taking right action to avoid further conflict or harm to the animals as they move away from the fire.

It’s important to give any animal you come across plenty of room and allow it to pass by without disturbing or chasing it. Pets and their food should be kept indoors, as easy access to these things might encourage a wild animal to keep coming back to your yard. BBQ grills should be cleaned and any food in coolers should not be left out. If there’s fallen fruit in your yard, it’s best to pick it up.

Keep garbage cans in a secure location and take them to the curb as close to pickup time as possible. Inquiries about wildlife resistant trash enclosures or containers can be directed to Douglas Disposal at 775-782-6029.

Wildlife may be seeking water right now, and it’s OK to leave some out for them during this time provided the water is changed frequently to keep it fresh and minimize ash content. Sanchez said that unlike food, which can encourage return behavior, animals will take a drink and move on. Water sources should be kept a good distance away from homes.

It’s important to slow down and be extra alert when driving on roads and highways where wildlife crossing signs are posted. As evidenced by my neighbor’s story, wild animals can show up in areas where they’re not normally expected to be seen, so it’s a good idea to remain watchful anytime you’re driving.

A little bit of awareness can make a big difference to wildlife as these fire circumstances and conditions continue to evolve.