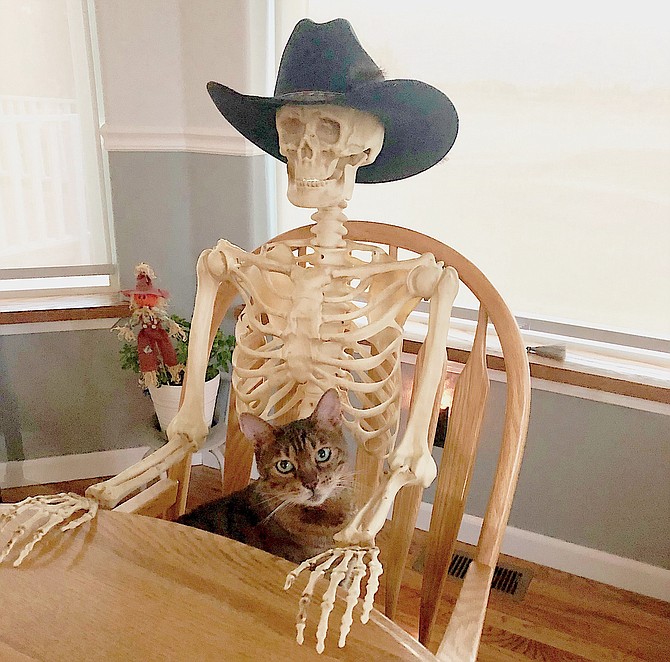 Genoa, Nev. — East Fork firefighters responded to a report of another smoldering Bently compost pile around 4:30 a.m. The company brough heavy equipment to bear on the fire and by 5:40 a.m. firefighters cleared the scene located near Stockyard. If you see something that way, they’re working on it.

The wind was gusting up to 40 mph at Minden-Tahoe Airport which isn’t far from the compost piles. It has been a blustery morning as a quick storm rolled through. It looks like the forecast precipitation won’t be turning up this morning, but there’s more in the works, according to the National Weather Service.

The Carson Valley Community Food Closet and the Family Support Council are hosting a costume patch 2:30-5 p.m. today at 1251 Waterloo Lane in Gardnerville. They are also giving out pumpkins in honor of the season.

I missed the T-bone collision that occurred around noon at Charlotte and Highway 395 south of Gardnerville. On Friday, I was pulling out from Virginia Ranch as a car was turning off the highway. Sure enough, there was a northbound vehicle coming that was obscured by the turning vehicle. I don’t know if that happened on Tuesday, but it doesn’t hurt to wait until you can see the whole picture before hitting the gas.

I skipped district court on Tuesday morning to attend a local journalism breakfast in Reno and watch a video about news deserts by Tonopah native and graduate student Carly Sauvageau.

My journalism internship was for the Tonopah Times Bonanza in 1986, and the video touched me. While Tuesday was proclaimed local journalism day, that’s pretty much every day at The R-C.

This feels like one of our “six feet of wind days.” We might see a little rain today, but it was still warmer than 50 degrees when I got up at 4 a.m. The temperature will drop as the front passes, but it won’t freeze.

Expect a high temperature of 62 degrees with the wind out of the southwest 10-15 mph gusting to 30 mph. There’s a slight chance of rain but I wouldn’t anticipate a deluge by any stretch of the imagination.