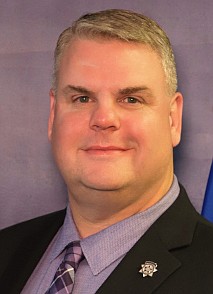 Chief of Nevada Parole and Probation Thomas Lawson appeared in Douglas County District Court to discuss seeking dishonorable discharges against probationers who haven't paid their restitution until after their probation expired.

The chief of Nevada’s Division of Parole and Probation acknowledged the agency has some work to do in communicating with the courts about the status of probationers and restitution.

“There were some failures on the part of the division for this defendant,” Chief Tom Lawson said on Tuesday.

Lawson, five members of his staff and the division’s representative from the Nevada Attorney General’s Office, attended court on Tuesday.

The case in question was that of Royall Marjorie Hampton-Palmer, who was on probation for embezzling $20,000 from the Minden McDonald’s over the course of her employment by stashing cash in her sleeves while doing deposit drops.

“Knowingly filing misleading documents is contemptuous. All of this interferes with the orderly conduct of justice.”

Hampton-Palmer was placed on probation in August 2017 as part of her suspended sentence on condition she paid at least $200 a month toward restitution.

Young reminded the court that he’d originally questioned whether Hampton-Palmer shouldn’t go to prison, but that he agreed to five years of probation in part because of the possibility she would make good on the theft.

He said he also ordered that if she got behind two payments, the division should notify the court.

Four years after she was sentenced, the court received a petition on April 21 seeking to dishonorably discharge Hampton-Palmer after her probation expired on March 26 due to good time credits.

The petition, which wasn’t served to either the defense or the prosecution indicated she’d stopped reporting on May 13, 2020, and that she still owed $15,000 in restitution.

Hampton-Palmer said she was essentially homeless for part of the probation, but she kept trying to contact the division.

In August, the court received a letter confirming the division was seeking to discharge Hampton-Palmer dishonorably, saying that she still owed $840 in supervision fees but neglecting to mention the money she still owed in restitution.

She saved $10,000 which she paid to the division in the last few weeks.

The issue is that every month a probationer pays fees and restitution they are eligible 10 days good-time credit off their probation.

Deputy Attorney General Nathan Holland pointed out to Young that even if the Hampton-Palmer had made her payments every month, she wouldn’t have completed the full restitution during her probation.

Young agreed but pointed out that isn’t what occurred.

“You can’t let people fall off,” Young said. “If they are not on probation, people need to be in prison.”

The issue is that once someone’s probation expires, the judge doesn’t have the authority to extend probation.

Young pointed out this was the fourth time a case where he was required to discharge someone, who owed restitution after they had already expired their probation.

Young gave Hampton-Palmer an honorable discharge and ordered the remaining restitution converted to a civil judgment.

He told Lawson it was not his intention to hold the division in contempt.