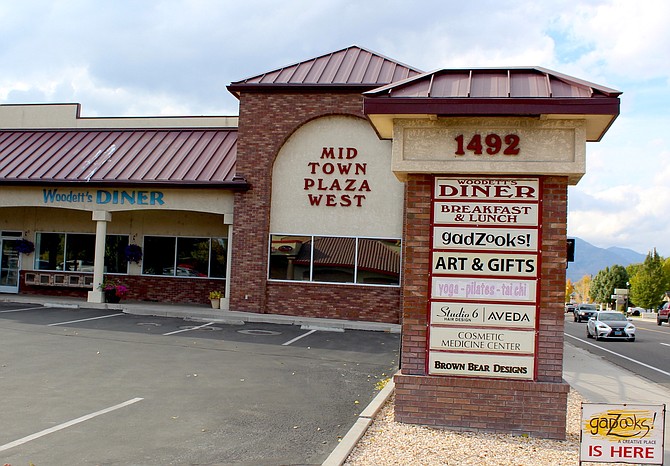 The new owners of Woodett’s Diner signed the lease for the popular Carson Valley breakfast spot just before receiving the award for best breakfast as part of the 26th Best of Carson Valley.

Businesses from around Carson Valley were recognized during a luncheon sponsored by The Record-Courier at the Carson Valley Inn on Wednesday.

“Over the past year, our country has faced some challenges,” said R-C Associate Publisher Tara Addeo during the luncheon. “But despite those challenges, you have pushed through, so congratulations. We’re here to honor your accomplishments.”

Woodett’s has been a Gardnerville staple for as long as the newspaper has conducted the Best of Carson Valley, winning the first year for best breakfast.

Marie and Edgar Arceo owned it for 16 years, handing off the spatula to Remon and Christelle Zamalis, who introduced themselves to the community at Wednesday’s luncheon.

“We are so thankful everyone has welcomed us into the community,” said Christelle. “I know the previous owners were very involved with the community, we want to continue to do the same and are very excited to be part of it.”

Originally from France, the couple moved to Northern Nevada in June after spending 22 years in Houston, Texas, where Remon was a private catering chef.

“Covid kind of pushed us out, and we just wanted to do something different,” said Christelle.

Shortly after relocating to Reno, they learned that the small-town diner was on the market and jumped on the opportunity.

“We liked the diner vibe and the view,” said Christelle. “It will stay the same Woodett’s, but we will add some new flavor.”

They said to expect some additions from their culture, including some French and Greek Cuisine on the menu.

You can’t have breakfast without coffee and taking first place for Best Coffee House was Coffee on Main.

Coffee on Main is locally-owned and family operated by the Hoppes. It has been a long-time town favorite, receiving Best Coffee House in the Carson Valley for 11 consecutive years.

Co-owner Lauren Hoppe said she worked at the shop as a teenager and after hearing the owners were retiring, she immediately called her parents.

“I wanted it to stay the same,” said Lauren. “I think if an outside person were to come in, it would not have had that same community vibe and I really wanted it to stay as close to that same feel as I could and I think the customers really appreciated that.”

Adele Hoppe said because Coffee on Main is locally owned and not a corporate business the customers are able to have a personal relationship with the baristas.

“The girls love their customers,” said Adele. “We get really close to them and everyone is treated like family.”

Speaking of family, Carson Valley Medical Center treats their patients like family too and that’s why they were voted Best Doctor and Best Customer Service in the Carson Valley.

“When you are best customer service, it really speaks volumes and to get it many years in a row, you know you are doing something right,” said Addeo.

Dr. Colleen Kriss received the title for Best Doctor in family medicine for the second year in a row.

“I really appreciate the votes, I love my patients dearly,” said Kriss.

Lead development and outreach coordinator Courtney Moore represented the medical center for the best Customer Service title during the luncheon.

“We have a great community and we’d like to thank them for their continued support,” said Moore. “We treat our patients like friends and family and everyone who comes in gets that kind of treatment.”

The Carson Valley Medical Center has received the title for best customer service for four years straight. The center is located at 1107 Highway 395 and provides urgent and emergency care, family, primary and senior care, specialty, behavioral, intensive care and more.

The 22-year-old opened the Minden men’s grooming salon, Taylor’s Scissors & Clippers, in September 2020, in the middle of the pandemic.

During this year’s Best of Carson Valley, she was voted Best Hairstylist, second best beauty and hair salon, third for best new business and the community’s second-best volunteer.

“I love seeing the entrepreneurship of young people in the community,” said Addeo. “She has quite a following, that’s some impressive placing.”

Lynch’s services extend outside of her shop with gift baskets for the football and basketball teams at Douglas High School, fundraisers and community events. She said she enjoys being a part of the community and is honored for the recognition.

“Keep setting goals and dreams so you don’t plateau in life and do everything with a smile,” said Lynch.

“It gives you a gauge of how your business is being viewed in the Valley, and that’s huge,” said Addeo.