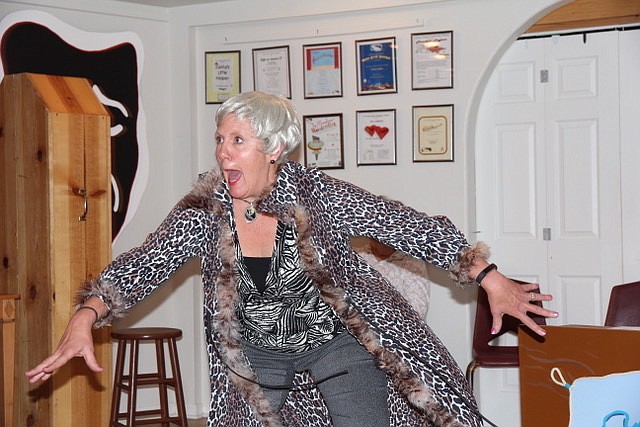 More than a year after the global pandemic closed the curtains on live theatres in March 2020, The Carson Valley Community Theatre is taking center stage with their first big production since the restrictions of the Coronavirus. “Rex’s Exes,” opening night is Oct. 15 at the CVIC Hall in Minden.

“We’re excited to be back and get together,” said Director of the production Jeff Basa. “Everyone is eager to get on stage and put on a great show for the community.”

After a year of not-so-fortunate circumstances, a good laugh and show may be enjoyed throughout the community and there’s nothing like a bounty hunter, a jilted bride with a paint-ball gun, and a not-so-dead guy at a family celebration of life to spruce things up. That is unless you are the Verdeens, then it’s completely normal.

The Southern-fried Verdeen cousins of Sweetgum, Texas, are on the brink of disaster again after the ‘Red Velvet Cake Wars’ in this farce sequel, ‘Rex’s Exes’ written by Jones Hope Wooten Playwrights.

“It has the same cast, humor and fun as the ‘Red Velvet Cake Wars,” said Basa. “It just takes place years later and with more chaos.”

Jessie Jones, Nicholas Hope and Jamie Wooten, collectively known as Jones Hope Wooten Playwrights are popular and widely-produced playwriters in the United States. They have written many laugh-out-loud comedies creating vivid strong roles for women, like ‘Red Velvet Cake Wars’ and its sequel ‘Rex’s Exes,’ along with others including fan favorites, ‘The Savannah Sippy Society,’ Dearly Beloved,’ ‘Christmas Belles,’ and ‘Always a Bridesmaid’ and more. For more information visit www.joneshopewooten.com

‘Rex’s Exes’ opens with Gaynelle’s 50th birthday, which she is not too thrilled about. In an effort to cheer her up, Peaches is determined to throw her a surprise party while Jimmie Wy’s “Wide Bride” wedding gown boutique takes off with success and Peaches’ recently declared dead husband returns and his romantic links to each cousin is revealed.

“It’s the goofiest of the three cousins,” said Basa. “All deal with basic life problems in a hilarious and fabricated manner.”

Basa who is not only directing the play but is portraying Wild Bill too, said things were different in the theatre before the coronavirus outbreak, just in casting alone.

“Just between 1 and 2 people being together and potentially one of those people coming down with the virus is a variable we’ve had to deal with,” said Basa. “Before, it was you came down with something, you were out for a couple days then you were back. It’s not like that now. You just never know what’s going to happen.”

Because of that, Basa said masks will have to be worn by the audience during the show for precaution measures and the safety of others.

“As far as I know it’s like that everywhere, with things opening up,’ he said. “I know Reno’s theatres are taking that precaution too, it’s just for safety reasons.”

The Carson Valley Community Theatre is an all-volunteer organization established in May 2004 to meet the theatre needs in Douglas County and surrounding areas. The Theatre’s mission is to promote, create, design and perform theatrical events for the Carson Valley community and general public, in addition to educational outreach to children and the public and works with Douglas High School music and drama departments and the Western Nevada College Arts department to encourage participation on and off the stage. For more information visit www.carsonvalleycommunitytheatre.org