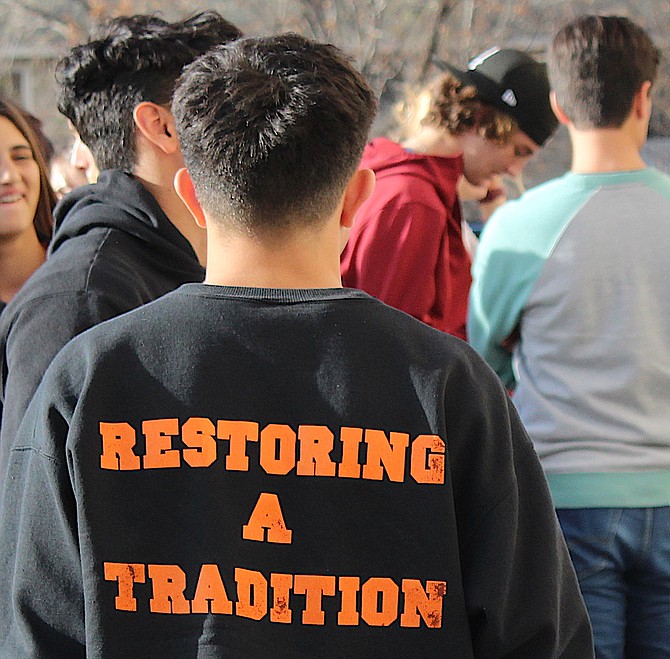 On Thursday, 30 members of Douglas High School’s Block D Club went shopping for the Carson Valley Community Food Closet after a break last year due to the coronavirus outbreak.

The students swarmed the Gardnerville Smith’s, picking out items from the shelves and paying with around $5,400 they raised themselves.

“I think this is the most important event that we put on because Thanksgiving is something that every family should be able to celebrate and be together for without having to worry about the expenditure,” Block D President Campbell Dedmon said. “Every Block D member I talked to said that this made us feel so good knowing that it really made a difference.”

Douglas student A.J. Schwartz and his classmates tackled the baking aisle loading bags of flour and sugar into their cart and puzzling over the spice rack.

The next aisle over the girls were loading up canned food.

Advisor Joe Andrews said the students had roughly $2,700 they raised by going door-to-door.

The club delivered 112 turkeys and almost 3,000 pounds of food to the food closet, Andrews said.

“Participating in the Turkey Drive was such a rewarding experience because we were able to purchase and deliver the items to the food closet ourselves,” said Block D Vice President Sofia Delang. “I want to thank the members of our community who donated to this cause because it wouldn’t have been possible with them.”

Director Sarah Sanchez said she expects that they will hand out 300-350 dinners this morning.

Today marks the return of the Kiwanis Club of Carson Valley annual Turkey Bingo at the CVIC Hall in Minden. For the first time, the club will be selling daubers and paper cards at the noon, 3 p.m. and 6 p.m. sessions.

The three days before Thanksgiving will see shoppers running around the grocery stores.

For those who want to actually run, the Carson Valley Turkey Trot in downtown Minden is Thanksgiving morning.

Sanchez said that as of Thursday 200 people were registered for the virtual and in-person run.

“I think that the good weather is working in our favor as far as early sign-ups go compared to previous years,” she said.

Forecasters say sunny skies and highs in the 50s are expected through the Thanksgiving holiday.