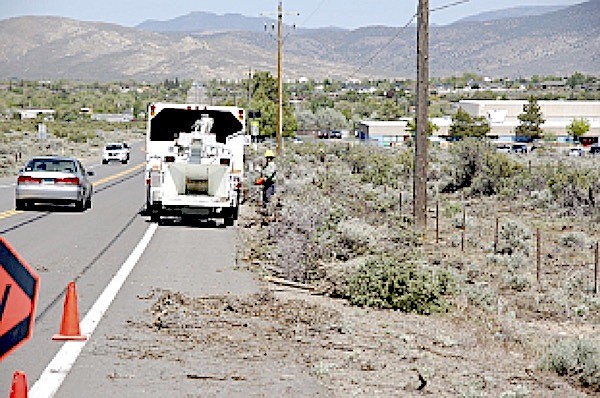 A new fuels and fire crew is working to clear brush from around power poles in Douglas County, according to the East Fork Fire Protection District.

The District accepted a contract offer from Nevada Energy to stand up a crew of ten personnel to provide fuels management work within Nevada Energy easements and around their infrastructure.

Part of this plan requires NV Energy to develop and maintain a fuels management and fire response program in and for its infrastructure. The devastating fires in California, which claimed several lives, and caused over a billion dollars in loss in 2018, were in some cases, attributed to failures with the PG and E infrastructure, later leading to bankruptcy, served as the driving force behind this legislation in Nevada.

NV Energy has since had its Fuels Management and Fire Response Program approved by the Public Service Commission and has already entered into fee service contracts with several neighboring fire agencies to conduct fuels management work in and around their infrastructure and respond to wildland fires impacting their infrastructure.

According to the district, those neighboring fire agencies that are participating enjoy the benefit of added fire suppression capacity as it is assumed that all wildland fires threaten NV Energy infrastructure, and that much of the fuel’s management work can be used to extend fuel breaks and defensible space within the urban interface environment, even when the work is conducted within utility easements. NV Energy has more than 1,000 acres of utility easements within the East Fork and more than 12,000 utility poles. The district’s participation is at no or little cost to the agency, District Chief Tod Carlini said on Tuesday.

NV Energy covers the cost of personnel and the initial cost of the apparatus and equipment for the program. An administrative fee is also assessed. The local agency, under established rates for both personnel and equipment, provides a monthly bill back to NV Energy for the services provided, including fire protection and response.

“The equipment funding is made under a ‘loan’ of sorts which is paid back via billing charges by the agency,” Carlini said.

The State of Nevada Division of Forestry also is a participant and provides technical assistance with fuels management work.

“NV Energy provides and project work and recommendations to the District and to the Division of Forestry for evaluation and to develop the treatment prescription,” East Fork Deputy Chief Amy Ray said. “From that point on, the District carries out the work.”

Ray oversees the project work on a daily basis and coordinates the work with the Operations Division, who has the overall oversight due to the fire response capability that these crews can and will provide.

Under the East Fork proposal, the district was able to hire 10 Fuels Management-Wildland Firefighting personnel and be able to acquire two Type 5 Engine, a Chipper Truck and Chipper.

The program does require top level administrative oversite which is funded in part through the program’s administrative fee. The District Board approved the contract in December of last year, estimated to be worth $4.5 million over the two-and-half year program.

Crews spent the first few weeks working with other crews in the region, training, and orientation to the District. Most recently, the East Fork Crews have been working in the Jac’s Valley area, along Jacks Valley Road, clearing brush under and around the pole line.

“I am very pleased with how this program has developed and for the employees we were able to recruit and assign to this mission for NV Energy,” Carlini said. “The added fire suppression capability will be a welcome feature in the months ahead. We appreciate the partnership with NV Energy in this very proactive and major effort in wildland fire prevention. NV Energy has been a very supporting and encouraging partner in this effort and is taking a lead role statewide in fire prevention and risk management.”

Deputy Chief Larry Goss, who leads the Training and Safety Division for the District was charged with implementing the program, including the hiring of the ten crew members and Squad Bosses. More than 100 people applied for the fulltime positions with East Fork.

East Fork now has 95 fulltime employees and has seen its volunteer ranks grow to 70 support, logistical, and wildland firefighters. East Fork provides all hazard services to 96 percent of Douglas County and covers 675 square miles, interfacing with the USFS, BLM, and BIA lands throughout the district.