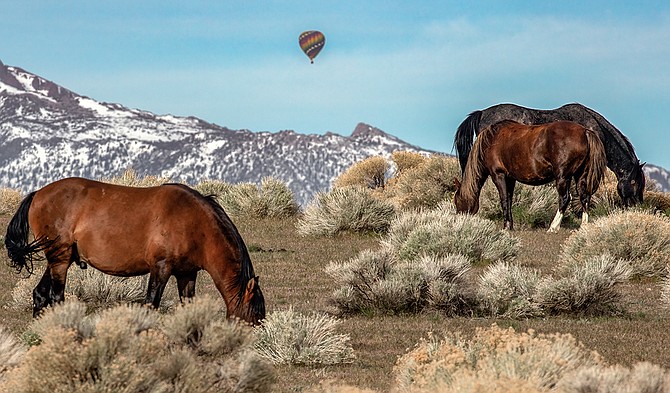 A hot hair balloon drifts in the background as wild horses graze in the Pine Nuts. JT Humphrey | Special to The R-C

If someone on the other side of the globe knows about Fish Springs, it is likely from the small band of wild horses that live in the Pine Nuts.

“Support for the horses is strongly bipartisan, and includes the business community, tourism board, the livestock permitee, national and local wild horse groups,” she said.

A program of darting horses with the contraceptive drug PZP, which was piloted in Douglas County, has resulted in an 81 percent reduction in reproduction at a maintenance cost of $35 a horse.

“It is much more economical than rounding up and boarding horses at taxpayers’ expense,” she said, estimated the cost of caring for one horse through its lifetime can be as much as $1 million.

Horse advocates are seeking an agreement with the Bureau of Land Management to keep the Fish Springs Herd on the range.

While it has been nearly a decade since the BLM last actively rounded up horses near Fish Springs. A proposal to conduct a roundup in 2018, was placed on hold after national outcry.

The trapping of 21 horses in the East Valley also prompted significant controversy.

Cioffi said every one of those horses has been transferred to a sanctuary where they were able to stay in their family bands.

That would not have been possible if any of the horses had been pregnant.

BLM Carson District Manager Ken Collum said the agency is interested in forming a working group to hash out an agreement.

An effort to get water out to two historic ponds in the Pine Nut Mountains for horses and other wildlife is under way.

Providing water up in the mountains helps keep the horses from coming down into neighborhoods, where they pose a hazard to motorists and sometimes annoy residents.

Supporters of the Fish Springs herd have been hauling water to a stock tank for years.

“One guy said he’s watered the horses for over 21 years,” she said.

The American Wild Horse Campaign Land Trust is leasing 640 acres from the Bently Family Ranch and intends to purchase it so they can drill a well and pipe water to existing seasonal ponds.

Director of Field Operations Greg Hendricks told commissioners that the well would use solar power and a gauge to keep Zorro’s Ponds at a level through the year.

Cioffi pointed out that during the winter, the horses have a source of water.

The ponds were dug by Basque sheep herders to provide water to their flocks.

The ponds would provide water to wildlife in the Pine Nuts, including a herd of antelope that Cioffi said has taken up residence.