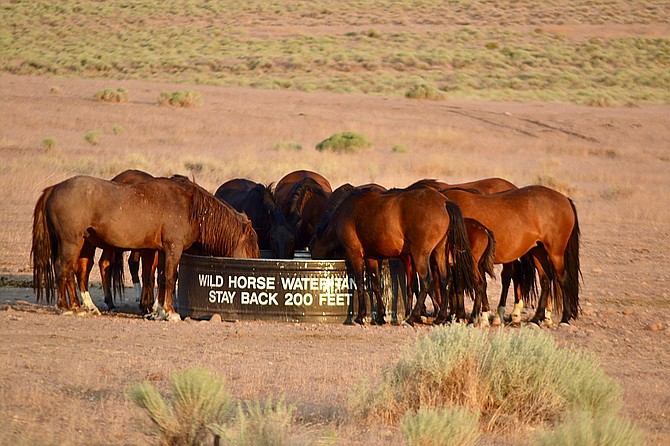 Wild horses drink from a water tank in this 2017 R-C file photo.

Opponents are celebrating the failure of a bill that would have urged Congress to fund a plan to reduce the number of wild horses to break out of the Nevada senate on Wednesday.

Senate Joint Resolution 3 claimed there are 50,000 wild horses on Nevada’s public lands, three times the 12,800 the Bureau of Land Management asserts should be in its herd management areas.

Under the Legislature’s rules, Wednesday was the date for bills to pass through the house of origin. The bill never came up for a vote.

According to the Legislature’s web site, the resolution hadn’t seen the inside of a committee since April 1 when an amendment sought to prioritize a contraceptive program that was pioneered with the Fish Springs herd nearly seven years ago.

On Wednesday, the American Wild Horse Campaign declared victory in fighting the resolution, that included letters, petitions and advertising in publications around Western Nevada, including The Record-Courier.

As with all bills that fail to meet deadlines, sponsors may attempt to introduce them in a different form before the Legislature adjourns in June.

According to the campaign, the April 1 amendment was adopted, prompting the coalition that sought the bill to withdraw their support.

“We commend the Senate Natural Resources committee for listening to the citizens of Nevada who want wild horses and burros protected on our public lands, not rounded up, penned and slaughtered,” said Greg Hendricks, the American Wild Horse Campaign’s Carson City-based director of field operations. “Right here in the legislature’s own backyard, we are proving that fertility control is an effective alternative to roundups for humanely managing wild horse populations while keeping these iconic animals wild in their natural habits.”

The campaign received support from the key grazing rights holder in the Pine Nut Mountains, Christopher Bently and from Assemblyman Jim Wheeler, R-Ruhenstroth.

Dosing mares with the contraceptive PZP began in Fish Springs in 2014, but was suspended for around a year after an animal rights organization sued to stop its administration.

A new plan to manage the horses included the use of the contraceptive.

The Fish Springs herd tends to be around 60 horses. The Bureau of Land Management conducted a trapping operation in late 2019 that captured about two dozen horses.

Wild horses and the Fish Spring herd in particular have been a cause celeb in Carson Valley for decades.

In 1969, heavy snow in the Pine Nuts encouraged volunteers to fly hay to the wild horses.

The rescue operation was conducted by helicopter and airplane and gained national attention and an award for volunteers Ed Court, East Fork Justice of the Peace Max Jones and Record-Courier reporter Roberta McConnell from the Animal Protection Institute of America.

The Wild Horse & Burro Act was approved by Congress in December 1971 and will observe its 50th anniversary this year.