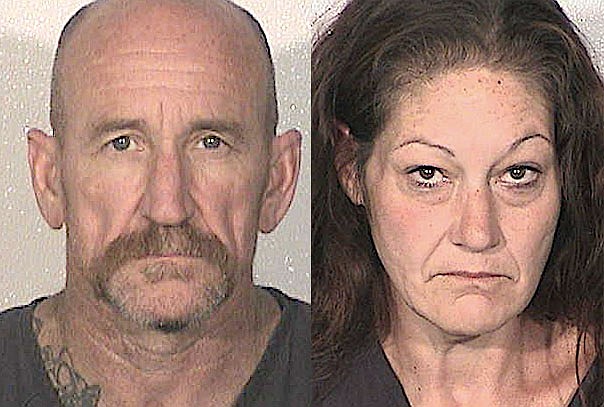 Calvin Davis and Chana Smith face trafficking charges after 212 grams of methamphetamine were allegedly found in their vehicle on Thursday.

Two people are facing drug felonies after authorities allegedly found nearly 7.5 ounces of methamphetamine when they were pulled over on Thursday afternoon.

Davis has a long criminal record, prosecutor Patrick Ferguson said in arguing for a cash bail.

He confirmed that he was paroled from prison in 2018 after being sentenced for several counts of burglary. He also has a record of hit and run. He said he is self-employed, but work has been hindered by the coronavirus outbreak.

His bail was set at $20,000 bondable and attorney Brian Filter was appointed to represent him.

Smith, who hails from Empire, Calif., also faces charges of possession of heroin and methamphetamine.

She said she was visiting her daughter in Winnemucca.

A third person, Jonathan Donald Schmidt, was pulled over while following Davis and Smith.

He was booked on charges of possession of a credit card without the owner’s consent and of methamphetamine.

Schmidt said he moved to Winnemucca to start a new life. Attorney Kristine Brown was appointed to represent him and his bail was set at $2,500 bondable.

He told East Fork Justice of the Peace Cassandra Jones that he was living in a motel and had a job.

Ferguson said Rico was in possession of more than 100 grams of methamphetamine. He appeared in East Fork Justice Court on Friday morning, where attorney Matthew Ence was appointed to represent him. His bail was set at $5,000 bondable and he was ordered to appear on Wednesday.