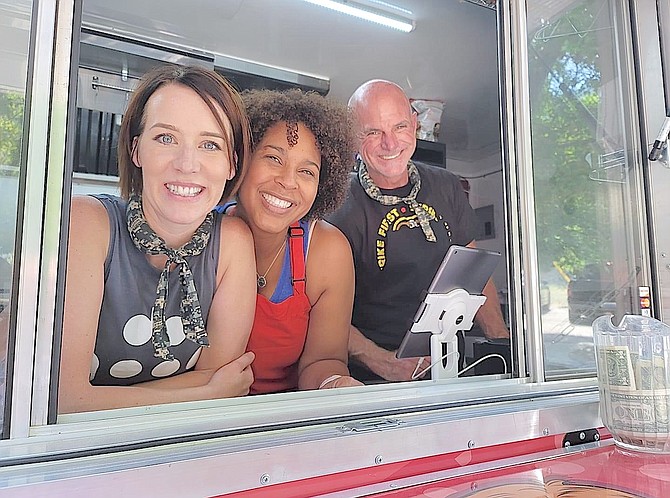 The crew at Hungry Hearts food truck will be at Genoa Bar this weekend.

Co-owned by Kim and Ellie McIntire and Lindsey and Shane McInnerny, the truck will be at the Genoa Bar every Friday through Sunday.

The McInnernys wanted to provide food at the Genoa Bar but to also find a way to support children in crisis in Northern Nevada.

The owners chose Austin’s House to be the recipient of the funds through the end of July.

Austin’s House operates an emergency shelter facility for children up to age 18 who have suffered abuse, neglect abandonment or other forms of maltreatment when a family relative or licensed foster care family is not available.

“Foster kids are important to us, so choosing Austin’s House as our grand opening nonprofit made all kinds of sense,” Kim McIntire said.

Kim McIntire said as soon as the McInnernys approached him and his wife about starting up Hungry Hearts, they jumped at the opportunity.

“Within three days we found the trailer and started cooking,” he said.

“We have the OG Smash burger with lettuce, tomatoes, pickles, cheese and our own aioli sauce; the Barbecue Smash Burger with crispy onions and barbecue sauce; and the Spicy Smash Burger with Frank’s RedHot sauce and jalapenos,” he said. “The smash cooking technique caramelizes the amino acids and sugars in the meat and keeps the juices in.”

McIntire said he selected beef from Gardnerville-based Carson Valley Meats after getting a tip from a friend.

“We knew as soon as we did a taste test that this was the meat for us,” he said. “We’ve been using other organic meats and this one blew us away with its fresh taste. We’ve been cooking with it all month as we’re getting ready to launch and we couldn’t ask for better meat for our signature burgers.”