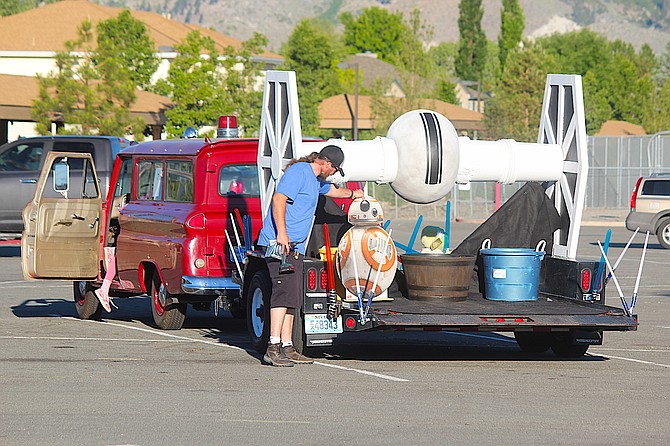 An imperial TIE fighter is on the tail of the antique Minden ambulance as entries in the annual Carson Valley Days Parade gather at Douglas High School on Saturday morning. The theme of the 2021 parade is In a Galaxy Far Far Away.

Anyone planning on watching this morning’s Carson Valley Days Parade had best get a move on, because Highway 395 through Minden and Gardnerville closes at 8 a.m.

Carson Valley Active 20-30 Club members organize the annual event, which this year has attracted around 66 participants.

In honor of the celebration, Douglas County commissioners proclaimed June to be “Cowboy Hat Month.”

Not even last year’s coronavirus lockdown could stop the annual celebration of everything Carson Valley, but longtime attendees will see a return of many pre-contagion festivities.

The Town of Minden will be out cooking breakfast for the ninth year in the park this morning for parade goers and participants. Sponsored by the town and Model Dairy, they start the flapjacks at 7 a.m. and keep cooking until the food runs out.

Runners signed up for Tahoe Youth and Family Services Moving For Recovery are encouraged to wear costumes as they make their way down Highway 395.

After a couple of chilly mornings, the temperatures for the start of today’s 76th annual Carson Valley Days Parade will be in the mid-50s in Minden, warming up to nearly 80 by the time the parade wraps up around 11 a.m.

Former ASPIRE Principal Miki Trujillo is the grand marshal of this year’s parade, having been named Citizen of the Year last year.

After that, the club will host live music, kids’ activities, horseshoe and corn hole tournaments, craft and food vendors, a full day of carnival fun, and raffle off prizes donated by local businesses.

The first Carson Valley Day was June 11, 1910, and was conceived “to bring people from all parts of the state to see what a wonderful Valley we have,” Record-Courier Publisher Bert Selkirk wrote a month before the big event. “This year at Minden, next year at Gardnerville, but at all times, all for Carson Valley.”

That first Carson Valley Day included a parade of sorts with trips through the Valley in automobiles and rigs, and a grand march.

At the time, Carson Valley was home to fewer than 2,000 people and reports from that first celebration indicated at least 3,000 were in Minden.

That first day wouldn’t be matched for another dozen years when the American Legion took charge in 1921 to celebrate the ending of World War I and honor the Valley’s veterans.

During most of those early years, the event was limited to a dance with the occasional larger event.

In 1938, the Carson Valley Active 20-30 Club, which was barely five years old at the time, decided to revive the celebration.

“The young men of the Carson Valley 20-30 Club are to be commended for their determination to take the lead in civic enterprise and no better way presents itself than through the revival of Carson Valley Day,” Selkirk wrote on June 3, 1938.

The Twenty-Thirtians were on a roll when they continued the tradition with a parade and big barbecue in 1939 and 1940.

However, the prospect of war loomed over the country in 1941.

“The Carson Valley Day celebration was scuttled for various reasons,” The R-C reported. “(The) main reason for canceling the celebration this year was that people of the community were not in favor of the plan and it was best to let it go for another year.”

After Pearl Harbor, that year turned into five, and it wasn’t until 1946 that it was restored.

“One of the few celebrations of its kind still held, Carson Valley Day is a continuous program from morning until late at night with the entire list of events being staged by local residents, just as it was when it originated in 1910.”

There have been changes in the intervening three-quarters of a century, but the parade has continued through wars, recessions and contagions ever since.