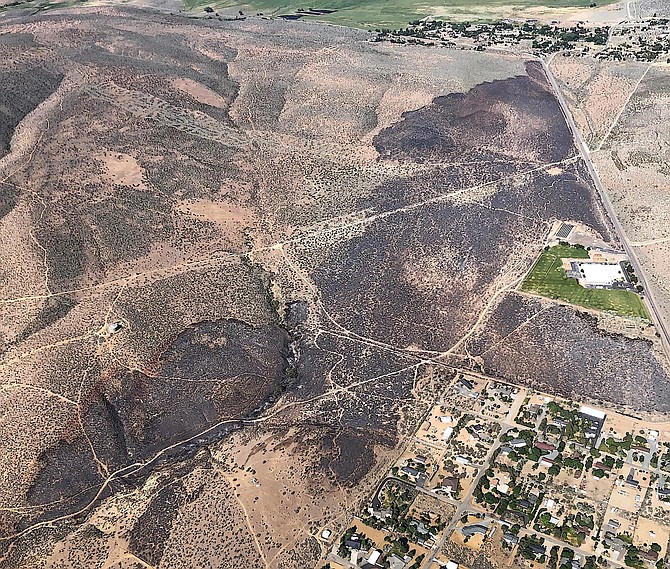 An aerial view of the area burned in the Jacks Valley fire on Wednesday.
US Forest Service

Officials revised the official size of the fire down to 285 acres after improved mapping.

No structures were reported lost in the fire.

Containment of the fire increased to 85 percent as of Thursday morning. Fire officials hope to have the fire contained by the end of the day.

The fire burned right up to the school site, with small piles still smoldering along its perimeter.

Evacuations of homes south of Jacks Valley Road both in Jacks Valley and sections of southern Indian Hills were conducted on Wednesday night. The evacuations remained in place overnight and were lifted Thursday morning. Jacks Valley Road was reopened to traffic, though firefighters asked that motorists keep an eye out for fire apparatus.

Firefighters said that today they will continue to hold and improve fire lines around the perimeter and start mopping up.

“Winds are predicted to be stronger in the morning and then reduce in the afternoon,” Spokeswoman Withanee Milligan said.

A fire management assistance grant was approved for the fire that will cover up to three-quarters of the cost from the Federal Emergency Management Agency’s Disaster Relief Fund.

It appears that defensible space might have saved quite a few homes & the school.