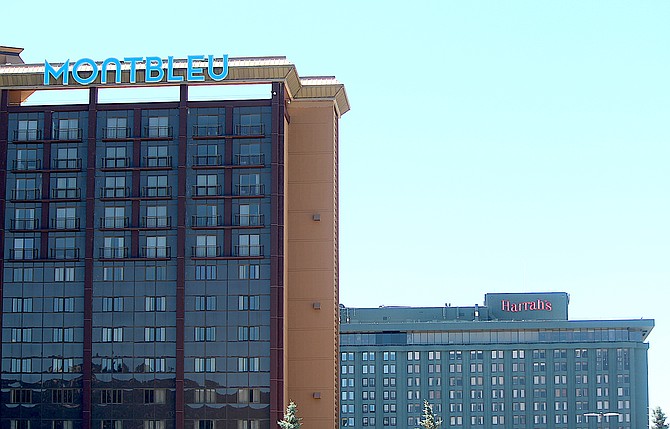 Stateline is saying au revoir to the Mont Bleu, which will be renamed Bally's Lake Tahoe.

The casino soon-to-be formerly known as MontBleu will be getting a new moniker, an executive said on Thursday.

Bally’s Lake Tahoe will be the new name of the casino, executive Timothy Tretton confirmed for Douglas County commissioners on Thursday.

Commissioners and Sheriff Dan Coverley sitting as the Liquor Board approved the name change for both the casino and its parent company, Premier Entertainment Tahoe.

This will technically be the third name change for the casino in the 21st Century.

During the transition from Caesars Tahoe to MontBleu in 2005, it was briefly dubbed the Nomad for the film “Smokin’ Aces.”

The hotel-casino was built in 1978 as the Park Tahoe and acquired, not built, as previously reported, by Caesars in 1980.

Caesars Entertainment owned Harveys and Harrah’s at Stateline before being purchased by Eldorado Resorts, which previously owned the MontBleu.

The casino was spun off to the company that would later become Bally’s in 2020 as part of a settlement with federal regulators.

With the merger between Eldorado and Caesars last year, the new company adopted the Caesars name.

The Stateline casino core is the chief source of Douglas County’s gaming revenue.

According to the Nevada Gaming Control Board, they raked in $20.29 million during May, a big jump over the $17,457 they won in May 2020 during the coronavirus lockdown.

In comparison, the combined win for casinos in East Fork Township and Carson City won $12.19 million, which is a record, according to gaming officials.