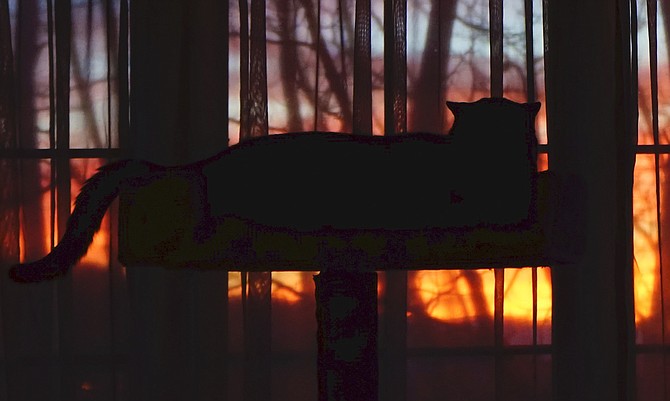 Little Max the cat awaits for sun up on Monday.

Genoa, Nev. — I anticipate learning the identity of two men killed during an altercation on Monday night in Saratoga Springs. Douglas investigators believe the 6:15 p.m. shooting was limited to the La Mirada address where it occurred.

I’m also following up on the wreck that occurred around 5:30 p.m. Monday that had the road closed for at least 45 minutes.

The investigation into the Douglas County Public Library letter will end up costing the library $12,508.43. Risk Management is paying the rest of the $25,016 invoice from Ogletree, Deakins, Nash, Smoak and Stewart. Library trustees meet virtually 10 a.m. Tuesday. Go to https://youtu.be/c6Qcl1FmhA8 to watch the meeting.

Coronavirus vaccine delayed by weather across the middle of the country has arrived and health officials are scrambling to get those promised second doses into arms. If you received a first dose, you’ll be notified where to go to get the second.

If you don’t have an appointment to be vaccinated and are not yet eligible, please don’t try and cut the line. You won’t get a shot and you’ll just slow things down for those who are waiting.

Douglas County’s positivity rate for coronavirus has dropped below the threshold. The case rate is still above the metric, but appears to be right on the cusp, meaning Douglas is getting very near to achieving the hat trick.

Expect mostly cloudy skies this morning clearing as the day wears on. The high will hit 55 degrees with the wind calm picking up out of the west at 5 mph.