‘Stunned’ to get football back 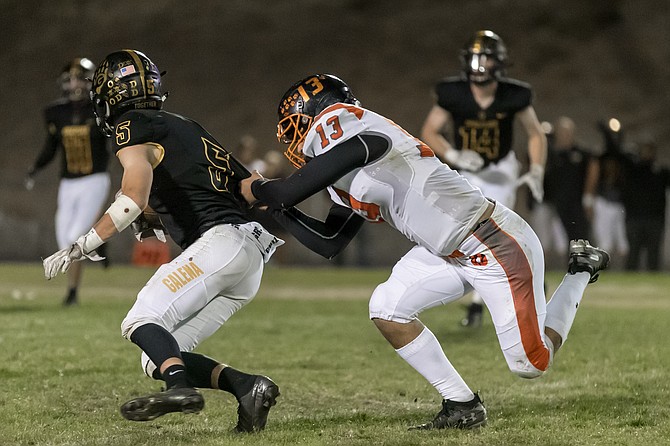 Gabe Foster tracks down a Galena player during the 2019 season. Photo by Ron Harpin.

When high school basketball and wrestling got the ax in Northern Nevada this year due to the pandemic, football coaches figured it was only a matter of time before their sport was next.After Governor Steve Sisolak removed football from the restricted list Wednesday afternoon, plans all around the region lurched into full swing.“There was a whole other level of excitement by the staff and the kids,” said Douglas High head coach Ernie Monfiletto, following the Tigers’ first day of practice.Douglas has hit the offseason workouts hard and Monfiletto praised his team's ability to stay ready on a moments notice for the landscape to change.“I have to hand it to our team because they’ve been focused since day one for all three of our preseasons,” Monfiletto said. “That’s been fantastic and that moved it up a notch.”Twenty-seven miles to the northeast, Dayton High School is hoping to see its first scheduled contest since the 2018 season.First-year head coach Terrence Spann, who was hired in January 2020 prior to the pandemic, couldn’t be happier for his seniors that get a chance.“My seniors are ecstatic. My seniors are like, ‘hey even though it’s six weeks, it’s six weeks to try and go out with a bang,’” Spann said. “Try to get that first league win in five years.”Staying safePriority no. 1 for the coaches in the area is safety.Nevada was one of the last remaining states in the country to give the go-ahead on high school football and no one is looking to return to non-contact drills or worse.The risk of contact is two-fold now, as coaches try to keep players safe from spreading the pandemic as well as prevent bodily injury after a 16-month break from the nature of the sport.

“Our biggest focus right now is just getting organized and training the kids and the coaches on all the protocols that we’re working on,” said Carson High head coach Blair Roman. “Honestly, just roll this out safely.”

Preventing injuries for athletes returning to play was another big priority for local coaches.The NIAA laid out a two-week minimum practice period for teams prior to games and has guidelines about when program’s can ramp up workouts safely with pads.“I think we have a great plan in place that is going to address that. I think the NIAA has thought about that. I think all of the region coaches have thought about that,” said Roman.

“Being in shape and being in football shape are two different things. We’re cautious with that part of it, but I feel like we are in great condition,” said Monfiletto. “On the same token, all of us have to take into account that we have had an absence in contact for a long time.”

With the constant fluctuation in expectations, schedules remain tentative as of Friday afternoon.Athletic directors and coaches alike are anticipating those being released next week, but with volleyball, soccer, tennis, cross country and golf also starting competition in early March, it has quickly become a busy season for athletic administrators.“My coaches, a lot of us were caught off guard because we were sure we weren’t going to play after basketball and wrestling got canceled,” said Spann. “We’re just excited to hopefully get Dayton football back and competitive. We just want to put a product on the field that the townspeople and the parents can be proud of.”The first day scheduled contest will be allowed in Northern Nevada is Thursday, March 4.