Endeavoring to persevere, on Mars 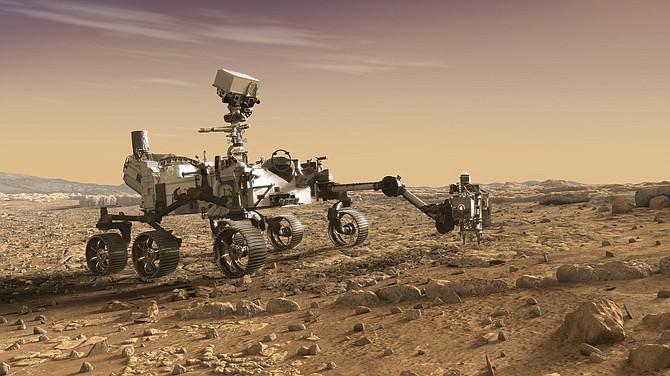 An artist’s rendition of the Perseverance Rover "studying rocks with its robotic arm."

After nearly seven months of cruising close to 300 million miles through space, NASA’s Mars Perseverance Rover is scheduled to land on the Red Planet today at approximately 12:55 p.m.

Perseverance, so named by middle school student Alexander Mather in the spirit of adapting to any situation, launched from Cape Canaveral Air Force Station in Florida on July 30. The spacecraft departed Earth at a speed of 24,600 mph and will reach the top of Mars’ atmosphere traveling 12,100 mph. Once that happens, it will take another seven minutes for the rover to complete its entry, descent, and landing (EDL) at the Jezero Crater.

Jezero Crater was chosen as the rover’s landing site because scientists believe it once held water and therefore has potential to reveal evidence of past microbial life on Mars. The crater’s varying terrain includes boulders, sand dunes, and steep cliffs, all of which pose landing challenges. Perseverance is equipped with new technology called Terrain-Relative Navigation, which enables the spacecraft to determine its location over the planet’s surface and adjust its trajectory as needed in order to touch down safely.

Perseverance is designed and programmed to complete each stage of the EDL entirely on its own. There’s about a 10.5-minute delay in receiving communications from Mars, so NASA teams won’t know if the landing is successful until after it has taken place. For this reason, those critical minutes of EDL are known as the “seven minutes of terror.”

If all goes as planned, Perseverance will spend the next two years exploring the area around Jezero Crater, searching for signs of ancient life and gathering samples of rock, dust, and soil. These samples will be stored in sealed tubes that may be retrieved by later missions and returned to Earth for analysis. Perseverance will collect data about the planet’s climate and test oxygen production technology in anticipation of future human expeditions to Mars.

NASA broadcasts a countdown and commentary of the Perseverance landing today starting at 11:15 a.m. Tune in by logging onto mars.nasa.gov/mars2020/timeline/landing/watch-online/. The site lists a number of additional broadcast channel options that include YouTube, Facebook, Twitter, and the NASA app. NASA TV coverage is available at www.nasa.gov/nasalive.

NASA has a wealth of online information available about the Mars 2020 Perseverance mission and other missions and projects. Take a deep dive into NASA’s Mars Exploration Program at mars.nasa.gov.

Marvel at Mars from wherever you are

Mars is observable high in the evening sky throughout the month of February. If the weather cooperates and skies are clear tonight, the moon can help skywatchers locate the planet after sunset.

Look southwest after dark to find red-hued Mars just above and to the right of the waxing crescent moon. Visibility is possible with the naked eye, but a pair of binoculars will enhance the planet’s resolution.