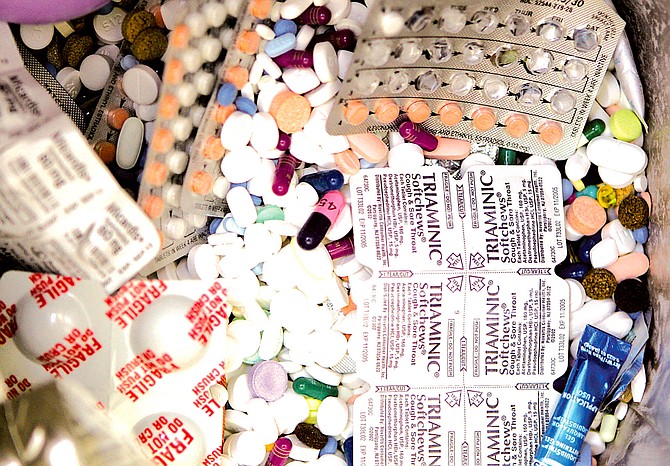 Partnership Douglas County and the Douglas County Sheriff’s Office host a Prescription Drug Round Up 10 a.m.-2 p.m. April 24 from at the DCSO, 1038 Buckeye Road in Minden.

Expired, unused, or unwanted prescription medications; over-the-counter pills and vitamins; prescription liquids; and pet medications can be brought to the local drop off site. Syringes, thermometers, inhalers, aerosol cans, ointments, lotions, hydrogen peroxide, and other liquids will not be accepted.

Medications should be left in their original container with the patient name and any other identifying information marked out.

National prescription drug take back days are held twice per year in April and October. This Drug Enforcement Administration program “aims to provide a safe, convenient, and responsible means” of disposing unused or expired medicines “while also educating the general public about the potential for abuse of medications” (deadiversion.usdoj.gov).

We’re entering the phase of the annual Lyrids meteor shower, which takes place each April and lasts about ten days. The shower peaks next week on April 22-23, just before the April 26 full Pink Moon.

Competing light from the moon will make spotting meteors a challenge, so sky gazers may have a better chance at seeing a shooting star this week when the moon isn’t quite as bright. Another option is to try viewing after the moon sets in the hours before dawn.

The Lyrids are named for the constellation Lyra, as this is the radiant, or point in the sky from which the meteors seem to originate. Lyra is named for the lyre, a U-shaped, stringed musical instrument often associated with ancient Greek poets and musicians.

To help locate the small constellation Lyra, look for it’s brightest star, Vega, as it rises above the northeastern horizon between 9-10 p.m. Vega is the “second brightest star in northern night skies” and is 25 light years, or about 150 trillion miles, away from Earth.

NASA explains Lyrids meteors result from Earth’s passing through the dusty debris trail left by the comet C/1861 G1 Thatcher, named for discoverer A. E. Thatcher. When these pieces of debris come into contact with our planet’s atmosphere, they disintegrate into what we see and commonly refer to as shooting stars. These brilliant streaks of light can be seen across all parts of the sky, so look up if you’re outside anytime after dark in the coming week for a chance to spot a Lyrids meteor.