Trading one Latin term for another 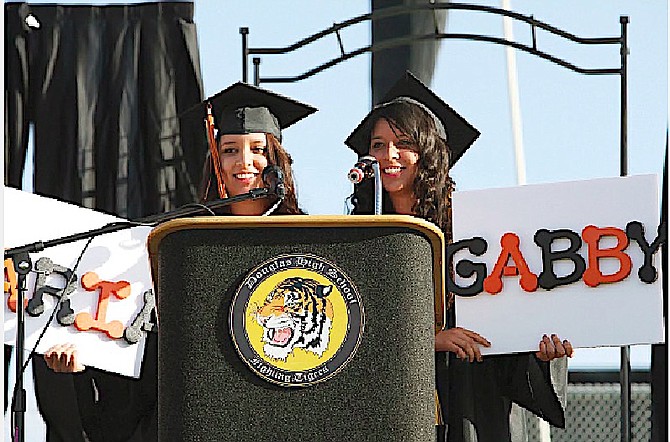 In 2014, there were two valedictorians at Douglas High School and they were twins.

Gabby and Maria Munoz Robles graduated tied at the top of their class and the news went viral with stories on them appearing in publications around the world.

In 2020, Douglas had two sets of vals and sals, one set for those students who also graduated from Western Nevada College.

On Tuesday, school board trustees heard a proposal to retire the concept.

The same Class of 2020 that produced two vals and two sals also featured 101 students with grade point averages of higher than 3.9.

Students have been encouraged to take advanced placement classes and actual college classes while in high school as a measure of success.

Those students are able to earn higher GPAs through those classes and tests in addition to a college degree.

Last year’s Jump Start salutatorian Olivia Ross-Dee said she wouldn’t trade her achievement for anything, but that it did cost her a lot of high school activities she would have otherwise participated in.

And that’s part of the issue.

Rommy Mack-Cronin said at some point it will be mathematically impossible for a student to achieve the school’s highest honors without also taking advanced placement and college courses.

The Record-Courier has made it a point to interview Douglas High’s top students as part of our graduation coverage for years. We’ve been told time and again that the competition for the honor has driven students to game the system or to drop out of sports or some other activity in order to focus on the win.

These students are intelligent and competitive and if anyone can work the system, they can.

There will still be a top-ranked student at Douglas and Whittell high schools, but according to school officials changing one Latin term for another will give students who are seeking a more rounded educational experience some room to breathe when working out their schedule.

We agree their argument makes sense, but school board trustees know there could be some pushback.