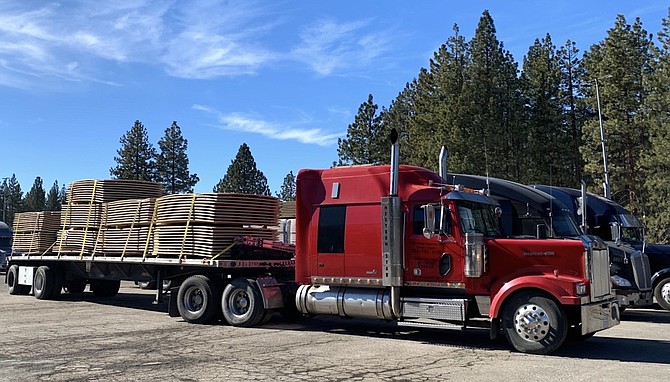 A semi loaded with parts for a hockey rink at Edgewood where NHL teams will compete on Feb. 20-21.

All-star left winger Brad Marchand grew up playing hockey on a frozen lake near his home in Halifax, Nova Scotia, and can’t wait to see the views Lake Tahoe has to offer.

Marchand, an alternate team captain for the National Hockey League’s Boston Bruins, said he has never been to the basin, but has seen photos.

“Being in Tahoe it will be much nicer scenery than in the past (outdoor games),” Marchand said during a press conference last week. “It should be a lot of fun and I’m really looking forward to it. Having a place like that is pretty special.”

Construction of the ice rink started Monday at Edgewood Tahoe Resort and players are excited for the inaugural NHL Outdoors at Lake Tahoe on Feb. 20-21.

Semi trucks loaded with equipment arrived in Stateline last week and staged at Harvey’s Lake Tahoe. Building the NHL-caliber sheet of ice will be an extensive process requiring the use of the world’s largest mobile refrigeration unit, according to the NHL.

The Colorado Avalanche will play the Vegas Golden Knights at noon Saturday and the Bruins will play the Philadelphia Flyers at noon on Sunday. Both games will be broadcast nationally on NBC and on Sportsnet and TVA Sports in Canada.

Flyers winger James van Riemsdyk has played in six out of the 30 outdoor games since the NHL started the format in 2003 said playing on a golf course will be different.

“The scenery should be cool and for this one, being on the golf course will have a different vibe and make it special,” he said.

Players addressed playing without a single fan in attendance.

“The scenery will be very unique and the aspect of not having fans there kind of makes it feel even more so like it used to when you were a kid,” said Bruins defensman Charlie McAvoy who has never played in an outside game. “You just go out with a couple friends and play. I think that aspect of it is going to be really unique and it’s just going to be a lot fun to be able to experience that.”

They also talked about what it means to play at such a high elevation, at about 6,300 feet, about 1,000 feet higher than the Avalanche’s home ice in Denver.

“We’ll see if we can get some oxygen tanks on the benches,” joked McAvoy.

“Hopefully we can adjust and catch our wind by the second period,” Marchand said.