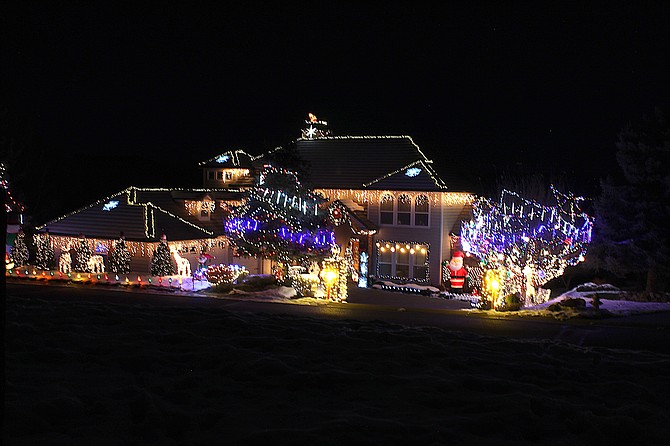 The LeFever's Genoa home is lit up for Christmas
Photo by Kurt Hildebrand.

“It was kind of comical,” LeFever observed. “He said ‘I’m putting up all kinds of stuff this year.’”

Then he helped LeFever unpack the thousands of lights and piece that go into the Christmas Display the Genoa Lakes resident puts up every year.

LeFever stores the thousands of lights that make up the display in the rafters of his attic, a project that had him putting in a lift to help him bring things down from storage.

“I basically store everything in the garage,” he said. “He gave me a hand for about an hour getting my stuff down, and he said, ‘I’ve never seen so much stuff.’”

LeFever estimates around 10,000 pieces make up the giant puzzle that is his Christmas display.

He and wife Karen Wondka-LeFever built the home in Genoa Lakes in 1998 while he was still with the Tahoe Douglas Fire Protection District. He had decoration outlets installed around the eaves to power the lights.

Like so many things, the project started small with a 25-bulb strand in the two trees.

“I started with the eaves and slowly went to the ground and then the trees,” LeFever said. “I’m on the third generation of light bulbs.”

While most of the display has gone over to LED, there are legacy decorations that the LeFevers inherited.

“The eaves still have the original bulbs, and I have a surplus of replacement bulbs.”

“That’s the only way you can have this amount of lighting,” he said. “Even with the LEDs, I threw a breaker. I had to pull all that power off the back of the house.”

The new lights also help reduce the cost of the display, which LeFever said bumps his power bill up $100-125 for the month.

Putting up the display takes about three weeks, but this year LeFever got a hand from Mother Nature.

“I usually have to look at the weather, but other than being short of moisture, you couldn’t ask for better weather this year,” he said.

He usually has to hammer stakes for the lights into the grass because the ground was frozen, but he said he was able to push them right in this year.

He delayed getting some of the bulbs up until after the Dec. 14 storm.

A lot of the blow-up decorations also suffer in the weather.

“You’ve got to watch the blow-ups,” he said. “If there’s any kind of weather, you have to get the water out of them before you turn them on because they’ll short out pretty quick.”

One nod to aging is getting help for work on the roof.

“I didn’t have a problem 15-20 years ago when I first started doing it, but now I get up there and it’s like …” he said. “It just takes one slip. It’s an accident waiting to happen.”

LeFever’s nephew Rob Felter is a roofer and helps out with the decorations higher on the house.

The couple inherited many of the decorations, including Santa’s sleigh.

“There’s a lot of history,” LeFever said. “The Santa Claus and the candles came from her ma; the sleigh came from grandma. I don’t know what she did with reindeer.” LeFever found those online.

The couple will have their children and grandchildren over for Christmas and LeFever plans to make a tour of the neighborhood on the golf cart.

“I’ve always talked about trying to get a group together and decorate golf carts and do a parade,” he said. “Maybe we could share three houses, stop along the way and have a libation.”

The display is popular among the LeFevers’ neighbors.

“Everyone knows when we go to bed,” Karen said.