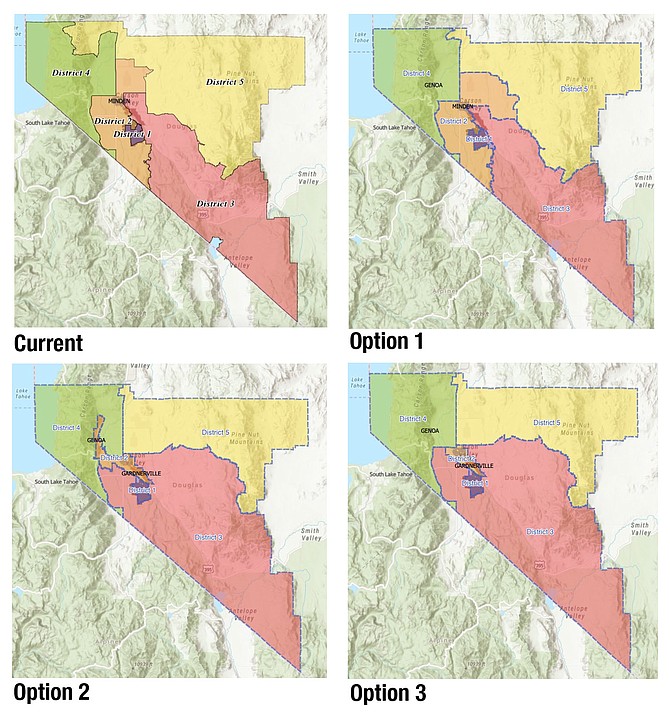 One option for proposed county commissioner district maps would combine all three of Carson Valley’s towns into a single district.

The county released proposed maps for county commissioners and school board trustee districts on Monday.

Gardnerville, Genoa and Minden are split between three districts, with one district covering the Gardnerville Ranchos.

County redistricting option 1 is the closest to the current configuration with Genoa and Alpine View in District 4 along with Lake Tahoe.

District 1 includes most of the Gardnerville Ranchos with the northern portion connected to District 2. That district also includes portions of Minden and wraps around the top of District 3 to include Minden-Tahoe Airport and parts of Johnson Lane and the East Valley.

District 3 runs from Minden all the way to Topaz Lake and includes the Highway 395 corridor through the Pine Nuts. District 5 under the first option includes the northern portion of the county including Indian Hills and Sunridge, Jacks Valley and east of Highway 395.

Under the second option, all three towns would be in District 2, which would stretch from Minden to the base of the Sierra foothills and then travel north along Jacks Valley Road. District 1 would include most of the Gardnerville Ranchos, while District 3 would wrap around the towns and include small portions of Minden and the Orchard Road portion of Gardnerville.

Option 3 would combine Minden and Gardnerville in district 2 and leave Genoa in District 4. Districts 3 and 5 would remain similar to their current boundaries.

County officials are seeking input on the proposed maps, which are located at Redistricting Maps

“These maps determine areas grouped together for the purposes of electing board members which is why it’s important to ensure each community is equally represented. Public input about what those boundaries look like is strongly encouraged and critical to the process,” said Douglas County Clerk-Treasurer Amy Burgans,. “This is a great opportunity for the public to be involved in an effort that will shape the way they’re represented for the next decade. We urge everyone to visit the webpages our office has created and give feedback so that their voices may be heard.”

County officials said that means the maps may not be approved until mid to late February, shortly before filing begins in March.

The first presentation for school board maps is Dec. 14. School Board trustees must pass a resolution adopting their option for the new maps.

While both commissioners and school board trustees must live in the district they represent, they are elected at large.

Genoa resident Bill Brooks encouraged his fellow residents to ask that Nevada’s oldest town be removed from District 4 at a recent board meeting.