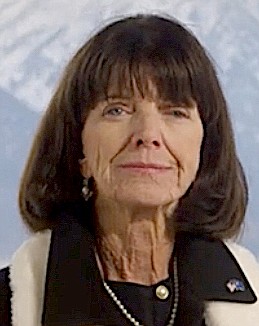 Even as redistricting is being challenged, the 2022 election in Douglas County is starting to take shape.

Settelmeyer has served the three terms he’s allowed in the Senate.

Assemblyman Jim Wheeler, R-Gardnerville, has indicated that he also plans to seek Settelmeyer’s seat but hasn’t issued a formal announcement yet.

“My entire career I have been a Nevada rural doctor and small business owner and I remain the Lyon County Health Officer but after leaving active practice, I felt compelled to continue to serve my community and state through thoughtful conservative policy setting in the state legislature,” Titus said in her announcement.

Redistricting approved by the Legislature and signed by Gov. Steve Sisolak on Nov. 16, was challenged the next day by two Pahrump Republicans who point out the new assembly districts bisect Nye County’s largest town.

The two men claim in their lawsuit that the special session of the Legislature made changes for some communities of interest but not others.

“Members of the redistricting committees and the Legislature had at times less than 24 hours to consider the proposals for which they voted,” the lawsuit filing asserts. “The process was criticized for leaving legislators little time to consider the maps and in the dark as to the data and process that led to the maps’ drawing.”

“The rural and urban voters of the new Assembly District 33 have entirely different types of local government, school districts and are contained in separate valleys with separate policy issues and concerns,” the lawsuit said.

Unlike redistricting conducted in 2011 by a specially appointed panel after the Legislature and governor deadlocked on new maps, the majority of both houses and the Governor’s Mansion are both occupied by Democrats.

Settelmeyer, Wheeler and Titus all criticized the new maps as gerrymandered, an argument picked up in the lawsuit.

Douglas County is expected to release new districting maps in the next week or so for consideration by county commissioners.

Those maps will affect next year’s commissioner and school board races, as well as several districts that divide representation geographically, like the Minden-Gardnerville Sanitation and East Fork Fire Protection districts.

The maps are scheduled to be considered in time for election filing in March 2022.

Should the courts overturn the current maps, that would affect elections statewide.

With a year to go before the 2022 General Election, there are 625,852 registered Democrats to 550,135 Republicans statewide, according to the Nevada Secretary of State’s Office.

There are also 501,362 nonpartisan voters registered in the state.

Douglas County has a significant Republican majority, with 20,534 active registered voters compared to 8,337 Democrats. Because Nevada has a closed primary, that means partisan offices like county commissioner or legislator are determined in the June primary in counties where one party is much larger than the other.

Many nonpartisan voters who registered when they obtained their drivers license through the DMV may not have indicated a party.

Voters can find out if and how they’re registered by visiting www.nvsos.gov/votersearch/