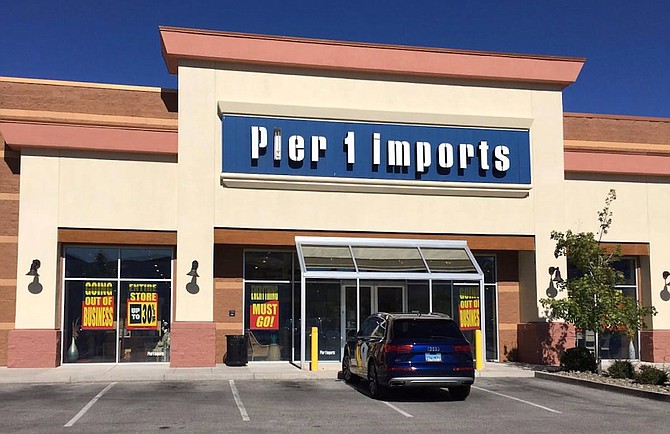 Pier 1 Imports at Carson Valley Plaza was one of the victims of the coronavirus shutdowns, with the national retailer recently filing for bankruptcy.

While debating to delete acknowledgement of the state’s mask mandate, Douglas County commissioners voted to approve a reopening plan on Thursday.

“If we say that we’re not going to enforce masks, the state could swoop down and fine our businesses because they relied on us,” said Commissioner Wes Rice.

Commission Chairman John Engels said the state was going to do what it would no matter what Douglas County decided.

“I don’t trust this guy at all,” Engels said. “This is my little protest. What the governor has submitted is going to go through no matter what.”

Engels and Commissioner Walt Nowosad voted to delete the reference to the mask mandate, but lost a 3-2 vote, with Rice, Mark Gardner and Danny Tarkanian voting against.

“I don’t agree with the mask requirement,” Commissioner Danny Tarkanian agreed, but said lifting it is beyond the county’s legal authority.

Deputy District Attorney Sam Taylor said he didn’t see any reason commissioners couldn’t include a letter that says they opposed the mask mandate with the plan.

County Manager Patrick Cates said the governor’s announcement that all the counties should be open by June 1 required a rewrite of the plan the county had been working on.

“There were a lot more things in place when we worked on this plan,” Cates said. “That all changed (Tuesday night) the day before several counties were to take their plans to the state COVID task force.”

The state is scheduled to review Douglas County’s plan on April 22.

“We all have a problem with having a state of emergency for a year,” Cates said.

“Douglas County will continue to push for reopening of our businesses within the limits of the law,” said Cates said. “During the transition to local control, it is important to note the State directive on masks will continue to be enforced in businesses by OSHA and other state boards and can be cited and fined for non-compliance. This is not coming from Douglas County. We ask all residents to be mindful of the impact on our businesses for ignoring this directive.”

Douglas doesn’t exercise a lot of control over business operation. It also hasn’t conducted any mask enforcement, besides the occasional trespassing call.

Most business regulation in the county is conducted by the state through a variety of licensing boards, the Nevada Gaming Control Board and state OSHA.

Anytime Fitness Regional Manager Jen Nalder said that her gyms have been served by OSHA many times due to mask issues.

“This is not an issue we agree with, it’s something we answer to,” she said. “The root of this cause is at the state level. We hope you will continue to support your local businesses and we all appreciate you support.”

Rice pointed out that Douglas was one of the first counties in the state to pass a resolution seeking to reopen businesses a year ago.

“The man didn’t have the courtesy to accept it from us,” he said. “We were one of the first counties to tell the governor he was wrong.”

Commissioners also approved a resolution supporting two bills before the Legislature to limit the time any emergency declaration could be maintained before it had to be ratified.

Cates said that neither bill got a hearing, but that rules for the Legislature are “pliable,” meaning that they could return in some other form.

Assembly Bill 93 was introduced by Assemblyman Jim Wheeler, R-Gardnerville, and would have forced the governor to seek legislative approval to continue to exercise emergency powers.