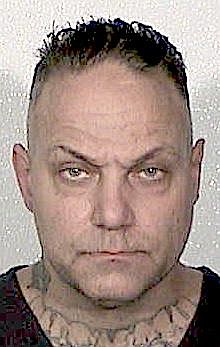 A jury trial for a man facing up to life in prison in a drug trafficking case was canceled after he failed to appear Tuesday in Douglas County District Court.

A $100,000 nationwide warrant has been issued for the arrest of Joseph Allen Cudia, 46, after alternative sentencing officials said a GPS monitoring bracelet has gone dead.

“I am loath to bring in 75-80 members of the community to have him simply not show up for trial,” Young said. “Until he’s apprehended the trial should be vacated.”

Defense attorney Adam Spicer agreed, saying he has not heard from Cudia.

Prosecutor Matthew Johnson asked for a little more time to find Cudia before vacating the trial.

Young told Johnson that if Cudia is brought back for trial, he would clear his calendar to expedite a trial.

Cudia, 46, was arrested in a May 14, 2020, drug raid on a Stateline vacation rental where investigators found more than a pound of methamphetamine.

Cudia was arrested in the raid along another man and a California woman who admitted to possession of heroin.

A second man arrested in the May raid, Diego Corralles, has yet to appear in district court.

Meagan Rene Turkington was granted a diversion on condition she pay $1,000 restitution to the owner of the property.

• A woman in her 70s was sentenced to 2-6 years in prison after she admitted to a subsequent felony instance of driving under the influence.

Alice Wohlers-Peters, 73, was taken into the custody on Monday after her sentence was pronounced.

Wohlers-Peters was arrested June 13, 2020, near Highway 395 and Stodick Parkway. At the time she had a .237 blood alcohol content.

She had previously been convicted of a felony DUI in 2006.

Under Nevada law, any subsequent instance of driving under the influence after being convicted of a felony is punishable by up to 15 years in prison, with a mandatory minimum of two years and a $2,000 fine.

Wohlers-Peters apologized to the court and thanked her family for their support during the proceedings, which were delayed due to medical issues.

District Judge Tom Gregory increased the prison time from the recommended to six years to increase the time she would be on parole.

Gregory said he hoped that Wohlers-Peters would give up drinking, but that she should seriously consider giving up driving when she gets out of prison.