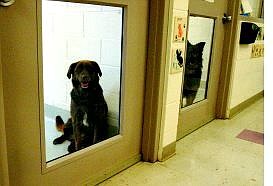 Emma Garrard/Nevada Appeal News Service Pet Network dogs Ginger and Cooper look out of the windows on the doors of their personal rooms Friday at Pet Network in Incline Village. The shelter may get more crowded as room is made for Gulf Coast animals.