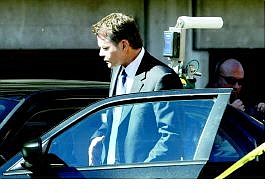 Jim Grant/Appeal News Service Actor Ray Liotta enters a vehicle used in a scene for the movie &quot;Smokin&#039; Aces,&quot; which is being filmed this month in Stateline and South Lake Tahoe.