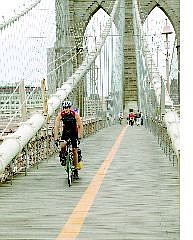 Rick Gunn pedals across the Brooklyn Bridge to finish the American leg of his bicycle journey around the world.