The voyage of Rick Gunn: Cycling among the people of the south wind 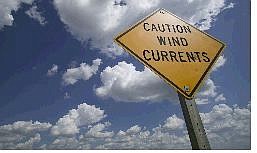 Photo by Rick Gunn A sign signals the beast. In his two-year trek across the world, Rick Gunn was confronted with the beastly winds of Kansas.