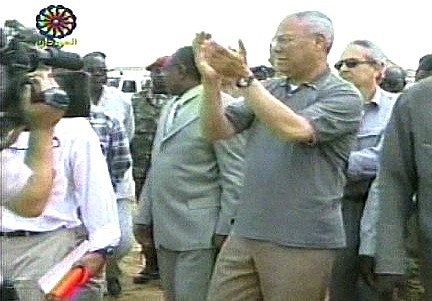 In this image from televsion Secretary of State Colin Powell claps as he and his group approaches a group of villagers in Al-Fasher, in the western province of Darfur in the Sudan, Wednesday, June 30, 2004. Powell came to tour camps and press the government to end ethnic violence and a humanitarian crisis he has called &quot;catastrophic.&quot; (AP Photo/Sudanese TV via APTN)