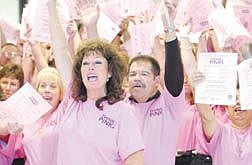 Carson City adminstrated assistant, Liz Teixeira, center left, and Juan Guzman, behind right wave their hands during a video taping of the Think Pink gathering at Carson City Hall Tuesday afternoon. The group is part of a Carson effort to bring awareness to benefits of early detection in breast cancer. photo by Rick Gunn