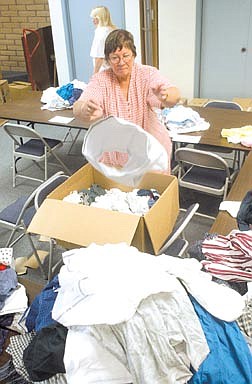 MaryEllen Radtke sorts underwear from one of nearly 50 boxes which were purchased wholesale from Kmart. Radtke, a Nevada Bell Pioneer, and is helping the school district&#039;s Children in Transition program, which provides clothing to disadvantaged students. Photo by Brian Corley