New historic marker to be dedicated at Spooner 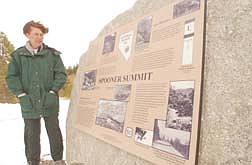 Barbara Prudic Nevada State Historic Marker Co-ordinator stands next to the new Historical Marker 261 at Spooner Summit Wednesday afternoon. The informational marker will be dedicated during a ceremony Friday at 2 p.m. at the marker near the picnic area at the south side of Spooner Summit.