Rules to be emphasized at the high school 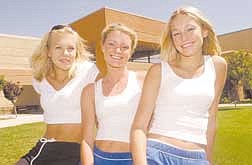 Photo illustration by Brian CorleyCarson High School cheerleaders from left Chelsea Bleuss, 17, Danielle Rolfe, 16, and Hilary Heller, 15, sit in front of Carson High. The girls are wearing tops that will be actively prohibited by a dress code this school year.