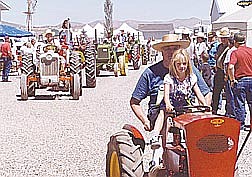 Brian Corley Amanda Nelson, 7, drives a tractor with her grandfather, Don Nelson, during the tractor show Saturday. The event continues today at the Johnson Lane home of Bill and Dorine Ramsden.