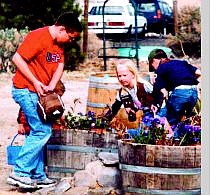 Robin Eppard/For the Nevada Appeal Cole Richmond, left, Sierra Carter and Will Struble search for the last of the eggs during the second annual Easter Egg Hunt April 3 put on by Robin&#039;s Ropers. The hunt included Carson City Pack 145, Den 7 of the Carson City Tiger Cubs, and Carson City Brownies Troop No. 182. 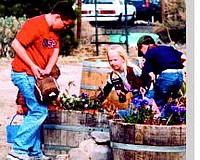