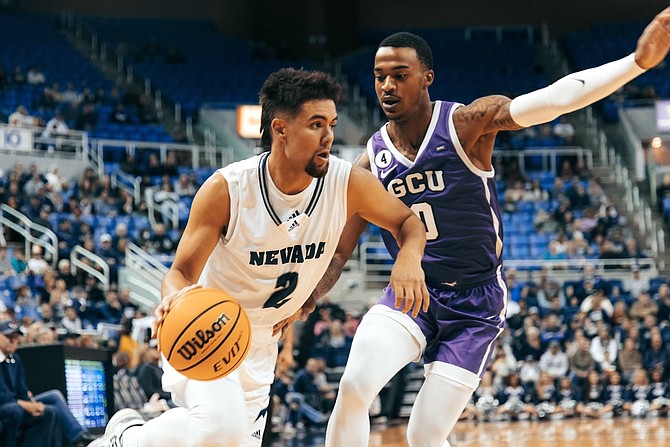 A look ahead to the Nevada Wolf Pack men’s basketball game on Saturday (7 p.m.) against the UNLV Rebels at Thomas & Mack Center in Las Vegas:

HOW TO WATCH, LISTEN: The game can be seen on CBS Sports Network and heard in Northern Nevada on 94.5 FM.

REBELS DOMINATE PACK LAST YEAR: UNLV beat Nevada 62-54 in Reno and 69-58 in Las Vegas last season. The Wolf Pack, however, was missing starter Desmond Cambridge Jr. in the Reno game and starters Grant Sherfield and Warren Washington in the Las Vegas game. Nevada’s Will Baker and Cambridge were a combined 9-of-35 from the floor in the game at Las Vegas, while Wolf Pack guard Kenan Blackshear was 0-for-7 from the floor and didn’t score a point in 36 minutes in the loss in Reno.

NEVADA’S LAST GAME: The Wolf Pack beat New Mexico, 97-94, in double overtime on Monday night at Lawlor Events Center behind 28 points from Will Baker, 22 from Jarod Lucas and 20 from Kenan Blackshear. Nevada is now 10-0 at home this year, with both of its league losses coming on the road at San Diego State and Boise State.

UNLV’S LAST GAME: The Rebels snapped a four-game losing streak on Tuesday with an 86-72 victory over Wyoming at Thomas & Mack Center. Elijah Harkless scored 28 points for UNLV, which is now 7-4 at home.

AT STAKE FOR NEVADA: The Wolf Pack, at 6-2 in league play, is very much in the running to win the Mountain West regular-season title. San Diego State (6-1) currently leads the league, a half-game ahead of Nevada and Boise State (6-2) and a game ahead of Utah State (5-2).

AT STAKE FOR UNLV: The goal of every Mountain West team is to at least finish in the top five in the conference’s regular season and avoid playing on the first day of the four-day conference tournament, March 8-11 at Las Vegas. UNLV, 2-6 in league play, is tied with Colorado State and ahead of only Wyoming (1-7) in the 11-team league and a full three games behind fifth-place New Mexico (5-3) with 10 to play.

THE HEAD COACHES: Nevada’s Steve Alford (58 years old) is in his fourth season at Nevada with a record of 63-44 overall and 34-27 in league games. Alford is 4-2 against UNLV as Nevada’s head coach. UNLV’s 39-year-old Kevin Kruger is 31-21 overall and 12-14 in Mountain West games in his second year in Las Vegas. Kruger played point guard for UNLV’s 2007 team that went to the Sweet 16 and was coached by Kruger’s father, Lon. Kruger is 2-0 against Nevada (and Alford) as UNLV’s head coach.

MIRROR IMAGES: Nevada’s Tre Coleman (6-7, 185) and UNLV’s Elijah Parquet (6-4, 195) seem to have the same mindset on the floor. Both are defensive specialists and rarely contribute statistically on offense. Coleman is 42-of-94 from the floor this year in 21 games, averaging 5.9 points a game. Parquet is 25-of-56 from the floor in 12 games and averaging 4.9 points a game. Parquet has played the last two games after missing eight games with a knee injury. UNLV is 11-1 when Parquet plays and 2-6 without him.