Slow down for wildlife 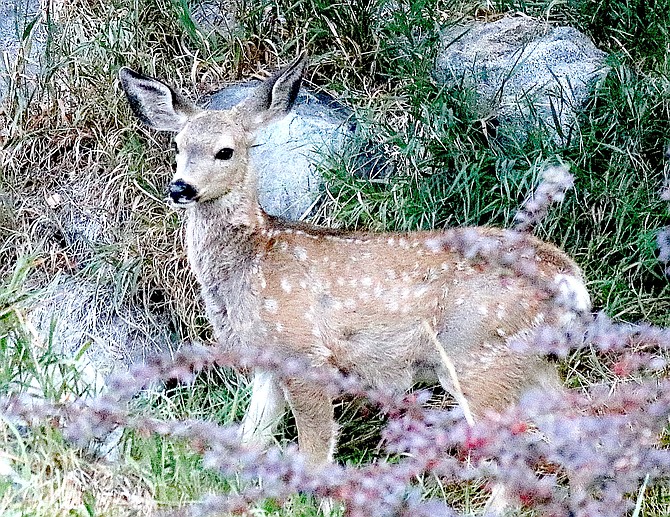 A fawn follows a doe toward Jacks Valley Road.

This weekend the first big event of fall, Candy Dance, will increase the population of Genoa a hundredfold.

Genoa’s been doing a fundraiser ever since residents held a dance a century ago so they could purchase streetlights. That was important because the sun goes down in Genoa pretty early compared to the rest of Western Nevada.

Estimates of the turnout for the annual fundraiser for Nevada’s Oldest Town have exceeded the 30,000 we report attending over the weekend, but that’s our story and we’re sticking to it.

Once you get into tens of thousands of people in the county’s tiniest unincorporated town, the actual total is sort of irrelevant.

There will be lots of vehicles bringing lots of people to town, and that’s hard on the wildlife, including the deer, bears, skunks and coyotes, among others.

Expect a similar turnout the following weekend a smidge further east with the Aviation Roundup at Minden-Tahoe Airport.

This time last week, motorists on Highway 395 experienced event levels of traffic. Unfortunately, the events turned out to be virtually simultaneous collisions in Indian Hills and Minden that backed up traffic for miles that afternoon.

While motorists were able to dodge the Minden wreck somewhat by heading up Genoa Lane, there was no such luck with the collision up above the Best Buy which blocked both the highway and the route through the Carson Valley Plaza parking lot.

There’s a possibility that bottleneck will finally be fixed when the county punches through Vista Grande to Jacks Valley, but the timing of that project is still a mystery.

But road construction is hardly a panacea for what ails us on our byways.

That will require developing some patience when behind the wheel, something that seems in short supply lately.