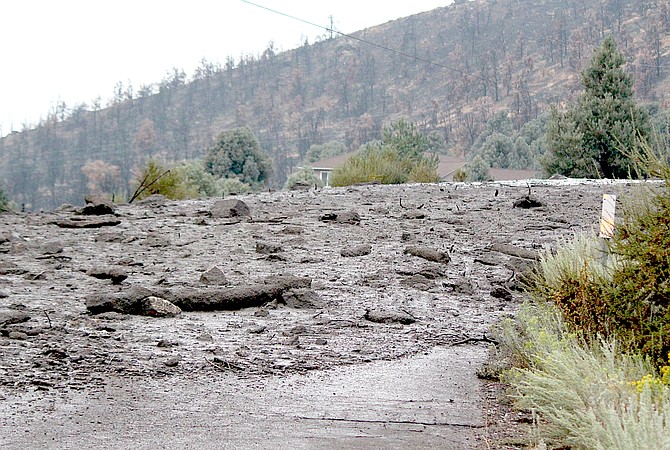 A storm cell dumped nearly three-quarters of an inch of rain above Holbrook Junction on Monday which sent a foot of mud and debris across Highland Way.

Residents reported the slide at around 4:55 p.m. on the road that is located in Holbrook Highlands.

According to a rain gauge placed in the Tamarack Fire burn just west of the mudslide, .74 inches of rain fell between 4 and 5 p.m.

Emergency personnel responded to the mudslide and called in a county grader to clear the road just south of Vista Valata.

Around three homes were cut off by the slide.

The grader was on scene by 6:30 p.m. as county officials surveyed the area.

There was some minor flooding on Highway 395 just north of the rest stop that washed mud and sticks onto the road. The highway was closed briefly around 5:30 p.m. while first responders assessed the situation by was reopened by 5:45 p.m.

The thunder cell that brought the rain to the Tamarack Burn above Holbrook Junction saw several lightning strikes around the region and prompted the National Weather Service in Reno to issue a flood advisory in the area.

There were no reports of injuries or major structural damage to any of the homes in the vicinity.

Around the same time, Highway 359 between Mono Lake and Hawthorne was closed for flooding in two locations, according to the Nevada Highway Patrol.

Forecasters are predicting any additional rain is likely to fall further east, where a flood watch is in effect through tonight.

A light rain fell in areas across Douglas County providing a brief respite from the hazardous smoky conditions from the Mosquito Fire.

Air quality on Tuesday morning was down to moderate and even good across Carson Valley at 4 a.m.

The firefighters working to extinguish the Mosquito Fire reported 16 percent containment on Monday night, but the fire continues to grow to 48,700 acres reported by the Inciweb site. That’s very close to the 50,000 acres affected by the fire on satellite mapping on the Fire Information for Resource Management System site on Tuesday morning.

The fire has split in two with a small fire still burning on its far western tip and a five-mile front burning east into the Sierra.

The fire is expected to continue to burn east and is currently about 25 miles from the west shore of Lake Tahoe.

It has been nearly six weeks since thunderstorms brought mudslides to the eastern Sierra, washing out Highway 89 to Markleeville and sending 6 feet of mud into the rear of a Foothill home near Fredericksburg.

A fundraiser for Larry and Casey Braun is 3 p.m. Saturday at Testa Motor Sports in Minden. A gofundme account set up by friend Daunelle Wulstein has raised $27,215 out of the $50,000 goal as of Tuesday morning.

A storm cell dumped enough rain above Holbrook Junction to send a foot of mud and debris across Highland Way.

Residents reported the slide at around 4:55 p.m. Firefighters on scene reported they would require a grader to help clear the road so residents could reach their homes.

The location saw several lightning strikes as what firefighters described as a significant cell came through the region.

As rain continued to fall there were concerns that there might be further slides.